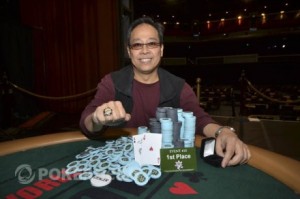 Three days ago, 337 people put up $1,600 in an attempt to take down a World Series of Poker Circuit tournament and win a shiny gold ring. On Monday only one man remained. Jerry Monroe was able to best “Wild” Bill Phillips heads-up and take down a first prize of $112,778.

To begin Day 3, 12 players were vying for a spot at the final table of nine. After two fairly quick bust outs, the remaining players were condensed to one ten-handed table. The final table bubble burst when John Holley moved all-in with

flop. Unfortunately for Holley, he was behind Michael Nasserazad’s

and failed to improve. His elimination set the official final table.

A few hands later, Russel Ivy got his entire stack in the middle with pocket sevens, but could not catch up to Jacob Naquin’s pocket tens. For his eighth-place finish, Ivy netted 27.5 points for the WSOPC National Leaderboard, which boosted Ivy to second place overall with 102.5 points. Still ahead of Ivy is Felicia Johnico with 107.5 points.

Jerry Monroe was able to score a key double up which helped propel him towards his victory. Monroe engaged in a battle of preflop raises with Jacob Naquin that resulted in Monroe being all-in for his tournament life.

. However, Monroe was able to hit a miracle card when the

rolled off on the turn. The

fell on the river, and momentum was officially in the hands of Monroe.

Michael Nasserazad was the next casualty. He was sent packing when his

could not hold up against Jacob Naquin’s

. Ronnie Sewell was then sent to the rail in sixth place when he moved all-in with jack-high against Jerry Monroe’s flopped trip aces.

Jeremy Drewery came into Day 3 as the chip leader, but could not seem to gain any momentum, losing 1.25 million in the first two levels. He eventually moved in preflop with

but was crushed by Monroe’s

From there it seemed that Bill Phillips was on the verge of elimination, but he managed to score two key double ups. Phillips’ pocket sevens cracked Naquin’s pocket jacks, and he rivered a nut flush a few hands later to double up through Chris Parsons. This hit sent Parsons’ chip stack into a downward spiral and eventually he was all-in and racing against Jerry Monroe. Parsons’ pocket nines were defeated when Monroe’s ace-jack flopped a jack and Parsons was sent home in fourth place.

Jacob Naquin was the next casualty of the final table, calling off his tournament life with

on a board of

. Monroe, however, was ahead of Naquins nines, as his

It seemed we would be in for quite a heads-up battle between Jerry Monroe and “Wild” Bill Phillips, but the two players were able to get all of the chips in the middle before the flop, on the third hand.

The board rolled out

and Monroe’s nines held to eliminate Phillips. Monroe was awarded $112,779, as well as a WSOPC Main Event Ring.