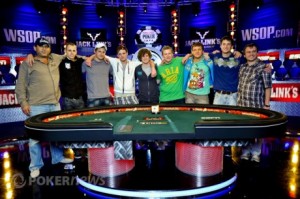 Day 2 of the 2011 World Series of Poker Circuit IP Biloxi Main Event wrapped for the day on Sunday with only 12 of the 173 who began, remaining. Jeremy Drewery leads the field with 1.524 million after going on a nice run in the last two levels of the night.

Day 2 proved to be tough for returning notables, Dwyte Pilgrim, Kathy Liebert, Allen Kessler, Andy Philachack, “The Captain” Tom Franklin and Kyle Cartwright, who were eliminated before the money bubble.

The field was trimmed at an incredible pace: over half the field was eliminated in four levels. The field hit the money bubble just after returning from dinner break.

Because the tables were short-handed, round-for-round play was instituted over hand-for-hand, and in one of those rounds, Scott Weinberg and Chris Bolek were both eliminated on the bubble. They split 36th place money, each taking home $1,267 — $333 less than the buy-in for the event.

Beverly Cheney was the last woman standing and her cash in this event added five points to her leaderboard score, putting her in fourth place overall on the WSOPC National Leaderboard. Russell Ivey, who is still in the field, will pass her by and could land anywhere between third and first place depending on his finish.

On the very last hand of the evening, while most of the remaining players were counting their stacks, a giant hand developed. A one-million-chip pot brewed between Mark Eddleman and Drewery. The two got their stacks all-in preflop with Eddleman holding pocket kings and Drewery holding pocket queens. The board ran out

, eliminating Eddleman and handing Drewery a massive chip lead over the rest of the field.

Action resumes at IP Biloxi on Monday and PokerNews will be on hand to provide live coverage until a winner is crowned.