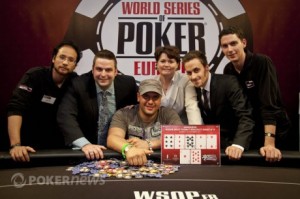 Day 1a and 1b of the World Series of Poker Circuit Biloxi Main Event kicked off on Saturday. Players in each flight played nine, forty-minute levels in order to progress to the second day of play. The first flight saw 218 runners, with 110 surviving to move on to Day 2. The second flight brought in a total of 111 players, of which 63 will be moving on to the second day. Charley Leroi emerged as the chip leader with 128,000 in chips.

The second flight saw the return of some notables from Day 1a vying for a second chance. Among those to return for a second time only to come up short were Chris Tryba and Dwyte Pilgrim. Tryba’s second bust came after he led out on a board reading

and was called by his opponent. The turn brought the

and Tryba continuation bet, only to find his opponent push out a raise. Tryba moved all-in but was snap-called by his opponent who quickly tabled

were drawing dead and he hit the rail for a second time.

Dwyte Pilgrim saw his second demise on a board reading

. Frank Wiese moved all of his chips in the middle, but had Pilgrim covered, forcing Pilgrim to make a decision for his tournament life. Ultimately Pilgrim decided to make the call, tabling

for trip aces. Unfortunately for Pilgrim, he was behind Wiese’s full house with

Several notables moving on from the second flight include Beverly Cheney (40,200), John Evans (12,300), and Jennifer Parrish (10,800). Also interesting to note is that all three of these players are close atop the WSOP Circuit National Leaderboard. Cheney currently sits in fifth, Parrish in 12th, and Evans in 14th. That brings added weight to this tournament for these players, who are not only competing for a WSOPC ring, but also to increase their points on the national leaderboard.

Play will resume Sunday for Day 2 at 1200 CST (1800 GMT), when the remaining 173 players will return to play 14 more forty-minute levels or to a final table, whichever comes first. Stay tuned for all of the most recent updates here on Pokernews