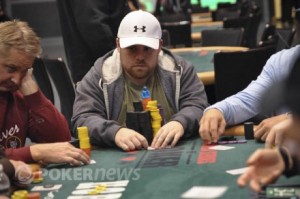 We’ll get to the nuts and bolts of Craig Casino’s remarkable true-life “chip and a chair” story in a moment. First, let’s jump to the immediate aftermath of Casino’s win Oct. 2 in the Heartland Poker Tour event at the Golden Gates Casino and Poker Parlour in Black Hawk.

Casino (yes, that’s his real name) had just cashed $293,270, quite a healthy share of the WPT’s first million-dollar prize pool. The Winfield, Ill., amateur was talking with HPT’s Jennifer Mastrud, who noted that whenever possible, Heartland donates 1 percent of an event’s prize pool to the nonprofit Disabled American Veterans association.

The exception is when HPT cannot do that because of local gaming laws, which was the case in Colorado.

Casino, 58, agreed on the spot to donate 1 percent of his winnings, about $3,000, to the DAV. Then he went home to Winfield, about 25 miles west of Chicago. He was watching the TV show Dancing with the Stars with his wife, Sue, and they were inspired by J.R. Martinez, an actor and motivational speaker who has extensive scars from burns while serving as an Army infantryman in Iraq.

“My wife and I are very patriotic, and watching J.R. was inspiring,” said Casino, an arborist. “So I emailed Jen the next day and told her I’d donate the whole $10,000.”

Casino has donated to a couple of other charities, while $120,000 will go to helping fund his mother’s in-home care. After taxes and other considerations, that doesn’t leave Casino a lot to work with, but he’s more than content.

He also came terribly close to walking away with nothing. The Golden Gates event broke the million-dollar mark (by just $3,000) because it also allowed rebuys for the first time. Casino bought back in twice, and he was on the ropes late in the tourney.

Casino took a big hit after the floor needed to be called over twice to sort out a hand he played against Golden, Co.’s Mary Flurkey, the eventual runner-up. On the next hand, he lost to a straight on the river. Because he thought he was covered, he called his wife and told her he’d be headed for the airport soon.

That’s when he realized he still had two 10,000 chips, not even enough for a small blind. But he tripled up when his J-7 hit, shoved with an A-9 that held up, and shoved again with 4-5 suited, flopping 2-3 and turning the wheel on the river. Staying aggressive, he quickly came back to take the chip lead.

As for what happened from there, you can see for yourself in December, when the event’s conclusion is televised nationally.

— Rick Gershman is Ante Up’s Colorado Ambassador. You can email him at rickgershman@gmail.com.