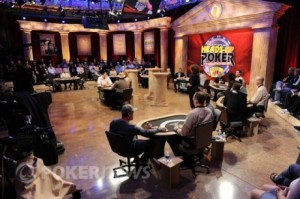 As the brutal summer drew to a much-anticipated close, most attention appeared to be focused on the North Louisiana poker market. The World Series of Poker Circuit stop at Bossier City could’ve been construed as a friendly reminder the Horseshoe still is the dominant force in these parts, at least where poker is concerned.

Someone forgot to send Coushatta Casino Resort that memo.
Coushatta rolled out the fall edition of its Seven Clans Poker Series in late September with a minimum of fanfare but a maximum amount of success. With a prize pool of more than $250,000 for three events, the Seven Clans was an obvious choice for many players who elected to pass on the events in Bossier City.

Tournament poker in Louisiana has been largely defined by Coushatta, and its efforts have done more than simply provide events for tournament players here. By virtue of the Seven Clans as well as the LSC at the Isle of Capri Lake Charles, a mini-circuit has been created that has even begun to produce its own stars.

The final table at the Seven Clans main event included reigning state champion Ly Do as well as Jacob Seale, who is without question the most consistent player in the state this year. Both fared well throughout the South in multiple events. Despite all of this success, however, these players remain virtually unknown beyond the state line. Horseshoe Bossier wouldn’t acknowledge Do as state champion, saying her title only applied to the Isle Lake Charles annual Lousiana State Poker Championships. Do responded by winning a weekly event at the Shoe just days after.

As a tournament, the Seven Clans still is largely underappreciated by many up north, but it continues to draw the most talented players the state has to offer. This speaks for itself. There’s something to be said for a tournament geared specifically to showcase the local circuit, and the Seven Clans does that better than any event.

In addition, Coushatta also has created a standard for live play that’s unmatched in Louisiana. It was the first to alter bad-beat rules, making the jackpot harder to hit and driving it to astronomical sums. As of this writing the bad-beat jackpot at Coushatta is more than $250,000 and climbing. Cash-game players fill the room seven days a week while up north it’s still difficult to find a game before noon except on weekends.

Despite the national attention focused on Bossier City during September, local players continue to speak loud and clear when it comes to local action. Taking home the title in the Seven Clans holds more local respect than a WSOPC ring, plain and simple. This can be chalked up in huge measure to the way the room is operated in Kinder.

It is one of the few rooms in Louisiana to employ a full-time tournament director as well as a room manager. Thomas Helo has done a fantastic job as tournament director at Coushatta, not only in staging the Seven Clans twice a year, but in providing weekly events that consistently draw the largest fields in the market.

Louisiana poker owes a debt of gratitude to Coushatta and the Seven Clans Cup for setting the standard for local tournaments.