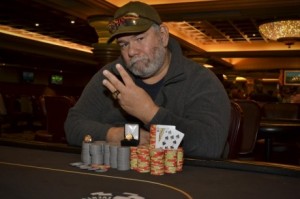 Frankenberger began Day 3 as the chip leader and used it to his advantage. In one hand, Frankenberger eliminated Alan Sternber, a fellow WPT Champ. According to the WPT Live Reporting Team, there was a bout 60,000 in the pot with a board reading

Sternberg was in need of an ace on the river, but it was not meant to be as the

Jason Mercier’s demise came when he raised to 4,000 from early position and received calls from both blinds. When the flop came down

Rossi went ahead and led out for 23,000, Mercier moved all-in for 87,700, and Rossi hit the tank. Eventually he emerged with a call, discovering his

was ahead of Mercier’s

river was no help to Mercier and he was eliminated in 39th place; meanwhile, Rossi chipped up to 300,000.

The unfortunate bubble boy, who busted in 28th place right at the end of the day, was Alistair Melville. After being crippled by Matt Stout, Melville was all-in from the big blind, and Dan Colman limped from middle position. Christian Harder called from the button, and Hoyt Corkins came along from the small blind. In order to survive, Melville needed to defeat three opponents. All three active players checked the

flop, as well as the

for the nut straight, which beat Melville’s

. With that, action came to a halt.