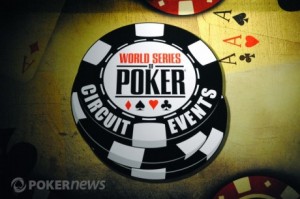 The first $10,000 buy-in tournament of Season X of the WPT kicked off on Thursday and drew a field of 185, including many of the aforementioned champions. Registration is open until the Day 2 begins, so that number is expected to grow. With a kind structure and a stacked field, it wasn’t surprising to see some elite poker action. Some players who were in action, and managed to survive the day, include David Williams (16,775), Lee Markholt (37,175), Dwyte Pilgrim (63,400), and Erik Seidel (69,500); however, each of them trails the Day 1 chip leader, Thomas Schreiber, who bagged up 104,000.

There were some crazy hands throughout the day as evidenced by Greg Lang’s once-in-a-lifetime feat of flopping a royal flush, holding the

in a heads-up pot. Unfortunately, he didn’t get paid off because his opponent checked behind on the

flop and then folded to Lang’s small turn bet.

In another intriguing hand, four players limped for 200 preflop only to have Tony Sinishtaj raise to 1,500 from the button. According to the World Poker Tour Live Update Team, three players made the call and the players saw a flop of

It was an action flop as the early-position player hit a full house but was second best to Politano’s quad threes! What’s more, the

river would have given Yakovenko a straight flush; instead, it was Politano who chipped up to 62,000.

Some players thrived, but others failed to survive. Among the players who fell on Day 1 were Micah Raskin, Jason Somerville, Jonathan Aguiar, John Cernuto, David Paredes, and Justin Schwartz. The last player on that list met his demise in Level 5 when an early-position player raised to 725 and Dwyte Pilgrim called from the cutoff. Schwartz responded by moving all-in for 5,850 from the button, Jason Mercier called from the small blind, and the other two players folded.

Schwartz was behind and even more so when the flop fell

river helped Schwartz, whose elimination came at the hands of the man many consider to be the best tournament poker player in the world. It would be hard to argue with that if Mercier can somehow add a World Poker Finals victory to his résumé.