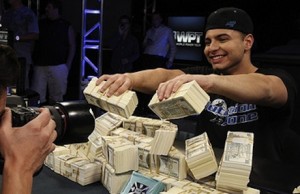 Play has wrapped up at the Horseshoe Southern Indiana where the newest 2011-2012 World Series of Poker Circuit Main Event champion has been crowned. Robert Castoire won the title and a cool $107,022. It didn’t come easy, though because Castoire had to outlast a field of 313 competitors over the course of three days and two Day 1 starting fields. Even more impressive was that Castoire was down 11-to-1 in chips at one point during heads-up play and came all the way back in dramatic fashion to claim his victory.

One of the most notable players at the final table was poker pro Bernard Lee. He lost most of his chips when he called the all-in of five-time WSOP Circuit ring winner Mark "Pegasus" Smith on the flop. Lee held

and held on to the lead through the river. Lee was unable to build enough momentum after that hand to make a significant comeback and was eliminated in eighth place shortly after.

David Hengen was the next to go because of an unsuccessful preflop bluff. After Hengen raised from the button, Aaron Massey three-bet from the small blind. Hengen moved all-in with

, but did not have enough chips to force out Massey who held

. When the board did not improve either hand, Hengen hit the rail in seventh place. Thang Nguyen followed him out the door minutes later when his

could not hold up against Donovan Darland’s

During five-handed play, Smith was in great shape to become chip leader. He got his money in on the turn holding top two pair with

and after a long deliberation, Castoire made the all-in call with

. Castoire made it clear that he believed he had fourteen outs when he called but quickly realized he had only eight. The

was one of them, though, and when the dealer put it down on the river, Smith was eliminated.

Darland was climbing steadily upward all day until he found himself with a massive decision against Massey. On a board reading

, Massey three-bet jammed into Darland who held a shorter stack. Eventually, Darland made the call and flipped over

and knocked out Darland in fourth place when the pair of tens failed to improve.

Three-handed play was quite a battle. Each player had the chip lead at different times and when the final hand of this series began, all players were within a few hundred thousand of one another. In a battle of the blinds, Massey five-bet shipped with

and was called by Jacob Bazely holding

. Massey hit a nine on the flop but couldn’t improve any further.

Heads-up play began with Bazely holding 3.9 million in chips to Castoire’s 2.3 million. Castoire quickly evened the score and then took a slight lead when the biggest pot of the tournament, to this point, occurred. Bazely limped his button and Castoire checked his big blind. The flop was

and Castoire check-called 60,000. The turn was the

and again Castoire opted to check-call, this time for 135,000. When the

hit the river, Castoire led for 200,000 and Bazely raised to 600,000. Within a matter of seconds, Castoire moved all-in and Bazely called. Castoire turned a straight with

, but Bazely had rivered the flush holding

Left with just 500,000, less than one-twelfth of the chips in play, Castoire was in need of some help. He got it all-in three times preflop and doubled up all three times. First, his

of Bazely with a nine on the river. Then, his

board, followed shortly by his

of Bazely and holding on through the river. These three hands, which took place over a 12-minute span, gave Castoire the chip lead and put Bazely back on his heels.

Just a few hands later, Bazely raised his button to 140,000 and Castoire defended his big blind with a call. The flop was

and it didn’t take long for Castoire to open-ship all-in. Both Castoire and Bazely were about even in chips. Bazely called immediately and tabled

for an open-ended straight draw. The turn was the

and gave Castoire his straight. The river was the

and Bazely was unable to fill up. The stacks were counted out and Castoire was declared the champion.

This is Castoire’s third World Series of Poker Circuit ring and second this year. He won rings in Tunica in 2008 and at Choctaw in January, but neither were in the Main Event. This prize represents the most he has won in a live tournament.

The next stop on the 2011-2012 WSOP Circuit will be in Hammond, Indiana, where the Main Event will kick off soon on Oct. 21. Last year, this stop attracted a whopping 872 players and was won by Kurt Jewell. The event will have two starting days this year, as do all Circuit Main Events, and there is a guaranteed prize pool of $1,500,000. PokerNews will be there to provide all of the update. We hope to see you there.

*Photo courtesy of the World Series of Poker