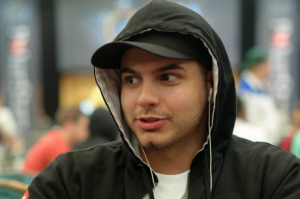 Last year, the World Series of Poker Circuit Horseshoe Southern Indiana hosted 289 poker players who were all shooting for the near six-figure first-place prize. Charles “Woody” Moore came away with the title and the money. The numbers are up slightly this year and after two Day 1 flights, the 309 entrants have been whittled to 164 players.

They are all chasing Brian Yeager who amassed 143,900 chips. Harold Dennis is not far behind Yeager, bagging 112,800 chips at the end of his Day 1 flight. Defending champion Moore wasn’t in the field on Saturday, but Kevin Calenzo was present to try and improve on his second place finish from last year. So far, so good for Calenzo as he will resume play on Sunday with 36,600 in chips.

In a 2011-2012 World Series of Poker Circuit twist, each of the Main Events at this year’s stops will include two Day 1 heats and with that, the opportunity to buy in twice. From glancing around the room, at least ten players, including Kevin Saul and Chad Batista, forked over a full $3,200 after failing to advance in the afternoon session. Saul and Batista took advantage of the new setup and bought into the second flight and secured their seats to Day 2 despite having busted earlier in the afternoon. Saul ended with 55,900 chips, and Batista bagged up 18,600.

They will not be the only notables in Sunday’s Day 2 field. Bernard Lee looked like he was going to join Saul and Batista in the evening session after a slow start during Day 1a. However, a late surge, thanks in large part to a set-over-set double up, allowed him to bag a healthy 44,700. 2011 WSOP bracelet-winner Aaron Steury advanced with 41,000 while Mark “Pegasus” Smith will have his work cut out for him on Day 2 after finishing with just 24,500.

One of the most interesting pots of either starting day was won by Derek Geise. He held

of his opponents, the three players got it all-in on the flop. Geise was able to hit a

on the turn before fading the redraws with a

A player we will have no choice but to keep our eye on is last year’s 18th place finisher Miguel “Zeek” Borrero. Not only did he deliver on a promise of revenge by knocking out Kenny Nguyen, but he talked another opponent into calling off his stack drawing very thin.

board, Borrero bet 2,950 after his opponent had checked. He was then faced with a raise to 6,500 to which he responded with an immediate all-in. After a few minutes of banter back and forth, Borrero was able to draw a call from his opponent who held

for a Broadway straight and faded the river to become an early chip leader of the Day 1b flight. His momentum stalled late though and he finished with 70,400.

Day 2 will begin at 1300 EDT (1700 GMT) and is sure to be full of excitement as players are scheduled to play through the money bubble and on to the final table. With 164 players remaining, many of whom have had scores of tournament success in the past, there is nowhere else you will want to be on Sunday than catching all the action on the best source for live poker updates, PokerNews.