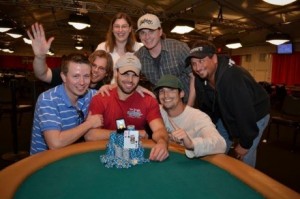 The Poker Players Alliance met with representatives of the Department of Justice recently to stress the importance of American citizens being able to get back the money they had on Full Tilt Poker.

The meeting took place before Friday’s announcement that Full Tilt had reached an acquisition agreement with the French-based Bernard Tapie Group. The deal is contingent on the group being able to reach a favorable resolution with the DOJ, presumably to recover at least some of the funds seized by the U.S. government in order use that money in repaying players.

"We still have an open dialogue with [the DOJ] and look forward to more productive conversations down the road," said John Pappas, executive director of the PPA. "We plan to follow up to make sure the DOJ gets a guarantee that players get restitution through any deal with new Full Tilt management."

Pappas, who said the PPA met with representatives of the DOJ involved in the case against Full Tilt in Manhattan, indicated that the DOJ responded favorably to the PPA’s assertions that poker players should be considered victims of Full Tilt to be compensated from funds seized from the company.

To get to the point at which the court case is concluded and forfeited funds are returned to victims could take years. The paperwork to handle all player claims would be a bureaucratic nightmare for the government. Because some of the seized funds likely would go to players anyway, it could stand to reason for the DOJ to reach an agreement that releases that money to Full Tilt with the understanding it goes back to the players.

"We continue to believe the best and most expedient way to reimburse players is through the sale of Full Tilt contingent on paying back players," Pappas said. "I think the DOJ would like to preserve as much of the forfeiture money for themselves, but they would view a new company coming in and paying back players as something beneficial to them and the player community."

Pappas said that the PPA has held meetings at the offices of nearly every member of the debt super committee and is optimistic that the possibility of legalizing online poker will be brought up as a possibility to help reduce the budget deficit.

The motions to dismiss filed by two of the men indicted on Black Friday — payment processor Chad Elie and Utah bank executive John Campos — make many of the arguments the PPA has long hoped to see brought up in court. The main point is that there is no federal law against online poker and it is not illegal in most states, therefore the Unlawful Internet Gambling Enforcement Act and Illegal Gambling Business Act don’t apply to online poker.

Those arguments could be key for the future of online poker. Pappas said the PPA isn’t going to be very involved in a case that doesn’t include poker players but could provide an amicus brief with research on the legality of online poker if asked to by the accused.