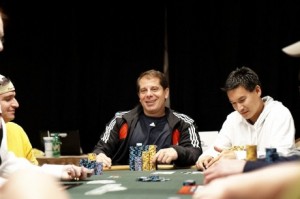 Each week, the Global Poker Index releases a list of the top 300 tournament poker players in the world. The list is created by using a formula that takes a player’s results over six half-year periods. There’s a new No. 1 this week: Jason Mercier has reclaimed the top spot on the GPI. For a look at the entire list of 300, visit the official GPI website.

Erik Seidel’s reign at the top is over after three weeks. Why? Believe it or not, the culprit was a result from three years ago. The GPI accounts for consistency, and while Seidel’s 2011 has been remarkable, his late-2008 through early-2009 results are scarce. With only two cashes between the beginning of the 2008 WSOPE and start of the 2009 WSOP, Seidel’s Period 6 results are lacking. His 19th-place finish in the 2008 WSOPE Main Event is now more than three years old, meaning it is no longer a part of his Period 6 results, and his GPI score at all.

Also swapping places were Bertrand “ElkY” Grospellier and Eugene Katchalov. Grospellier’s standings, like Mercier’s, saw no change. Katchalov dropped from No. 3 to No. 4 because of a result from the 2009 EPT London High Roller Event. His third-place finish fell from Period 4 to Period 5 and even though he had another Period 4 result to take its place, it wasn’t enough to stay ahead of Grospellier.

There are ten new additions to the GPI this week. Making the biggest splash was Daniel Colman, debuting at No. 149. With a 10th-place finish at the 2011 WPT Borgata Poker Open, Colman picked up a third cash in the last six months to give him a full complement of Period 1 scores. Combined with a full slate of Period 2 scores, along with a few older cashes, Colman made a nice entrance to the GPI rankings.

The biggest rises of the week belonged to Daniel Idema and Rupert Elder. In each of their cases, the reasons were the same. They previously had no Period 2 results. They do now, though, as their respective finishes from the 2011 APT Philippines Main Event (which didn’t even figure into their top three Period 1 scores) dropped into Period 2, giving them solid jolts up the standings.

Darren Elias cracked the top 40, rising up the ranks the more conventional way with a recent big score. His fifth-place finish in the 2011 WPT Borgata Poker Open vastly improved his Period 1 results.

Chris Bjorin took the biggest hit of the week. Two EPT London side-event scores from 2010 fell out of his Period 2 results and were not replaced, thus leaving his Period 2 scores a little lighter. Meanwhile, Finnish pro Jani Sointula suffered a steep drop as well. His only Period 2 score had been a second-place finish at the 2010 EPT London High Roller Event. That dropped into Period 3, leaving a blank Period 2 slate for Sointula. In addition, Sointula’s 35th-place showing in the 2008 WSOPE Main Event, like Erik Seidel’s, no longer counts toward his GPI score. Jose "Nacho" Barbero, the winner of the 2010 EPT London High Roller, also saw his ranking fall.

Which players are due for a fall next week? Jason Mercier’s return trip to the top spot on the GPI may be short lived. His second largest career score came in the 2008 EPT London High Roller event. Next week, that score will fall out of his Period 6 results and no longer be counted toward his GPI. Although he has other scores in Period 6 that will soften the blow, there will be even more change in Mercier’s GPI.

Mercier’s Period 4 results will lose two six-figure scores, his fourth-place finish at the 2009 WSOPE Main Event and a win in a £2,500 side event at the 2009 EPT London. However, both will immediately be picked up in his Period 5 calculations. In addition, two other six-figure scores will take their places, so once again, Mercier’s consistent success will soften the blow, and in this case maybe even improve his score with a much stronger Period 5.

Remember how we mentioned Erik Seidel has only one other Period 6 cash? Well, depending on the GPI cutoff date, that score could very well fall from Seidel’s results next week (and if not next week, the following week). Regardless, Seidel is due to lose a few points there.

At the time of the writing of this article, the 2011 EPT London Main Event concluded with Benny Spindler taking the title. Spindler (No. 116), and second-place finisher Steve O’Dwyer (No. 87) were the only players at the final table already in the GPI top 300. Surely, each will be rising up the GPI rankings significantly next week.