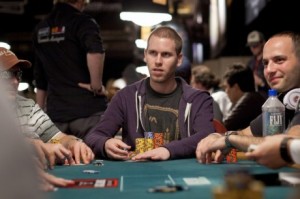 Tucker is no stranger to tournaments. “This is my biggest cash,” he told Ho in a post-tournament interview. “I got lucky in an online tournament that allowed me to play in live games like the Scotty Nguyen tournaments.”
Tucker’s day job kept him playing recreationally, but he managed to pull out small tournament cashes, including a $500 win in the Winter Bayou Poker Challenge in New Orleans. From an online win to WinStar main event champion, Tucker found himself clutching his “trophy bracelet” and more money than he was sure what to do with. When Ho asked about his plans for his winnings he shrugged his shoulders and shook his head in awe.
“I have two daughters,” he said. “This will allow me to do a lot for them.”

WinStar poker room manager Jay Wiles attributes the success of the series to the players and hard-working staff.

“We are continually improving. This year we allowed re-entries into the main event and that drew tremendous player support. We don’t see any reason not to continue providing that option.”

There was more than hot tournament action at WinStar. Cash games were busting at the seams in the full 46-table room where games from $1-$2 no-limit hold’em and $4-$8 limit to $10-$20 pot-limit Omaha were spread. By Labor Day evening there were still 18 tables running.

• Another upcoming event on the Oklahoma tournament map, Downstream Casino is heading into an action-packed month with its HPT series Oct. 13-24. The main event guarantees $100,000 for first place and a Brad Garrett charity comedy show will take place during the series with all money going to the Joplin Relief Fund, but nothing has been confirmed.

For as little as $45 players can satellite into the $1,100 main event and work their way to the televised final table. Other satellite buy-ins range from $80-$350, including tournament entry fees.

Downstream Casino poker room manager Elliott Schecter contends that October is a great time for poker players to come out and play.

“Our cash games are very exciting during the HPT series. We attract players from all over the four-state area and HPT is our solution to provide players a cost-effective way to score a big tournament win.”

Players can register online by visiting downstreamcasino.com. Downstream Casino is four miles west of Joplin, Mo., so mark the dates in your planner and we will see you at the final table.

—Crystalynn Harris is the Ante Up Ambassador for the Oklahoma-Kansas area. You can email her at crystalynn@anteupmagazine.com.