Hellmuth pays a visit to the Bayou 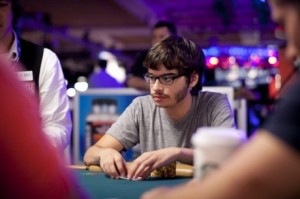 In Louisiana we’ve become accustomed to seeing our share of A-List Hollywood stars. With Shreveport ranked as the second-most-preferred location for filmmaking and often referred to as “Hollywood South,” hardly a day goes by without a celebrity sighting. It is rare, however, to see a poker legend come to town and we were happy to host two of them in recent weeks.

Phil Hellmuth made an appearance at the L’Auberge du Lac in Lake Charles to celebrate the opening of the new poker room by playing in an invitation-only $75K-guarantee tournament. Joining Hellmuth at the tables were three Playboy Playmates.

These events are geared to be fun for the celebrities and the players, but the event at the L’Auberge quickly became a competitive affair as players not only tried to take it down but send Hellmuth to the rail, too.
“It ran so long that the final table agreed to a chip chop after a lengthy session,” L’Auberge’s Kerry Andersen said. The ultimate bragging rights went to Jared Arbuckle, who amassed the biggest stack and busted the Poker Brat in the process for an additional $10,000.

Up North in Bossier City it was Scotty Nguyen gracing the red carpet, baby. Fresh off his “On The Button” interview in last month’s Ante Up, Nguyen arrived at the Horseshoe to kick off World Series of Poker Circuit at Bossier by competing in two events.

WSOPC STARTS WITH A BANG: As Ante Up went to press the WSOPC event in Bossier City was still running, but the initial response was overwhelming as 175 preregistered for the first ring event, and Event 2 drew more than 600 entries.

“I had a few concerns with the rooftop structure, but I have to say that it exceeded my expectations. It’s sturdy and secure and the air conditioning is fantastic.”

Look for a full report in next month’s Ante Up.

DARK CITY WELL REPRESENTED: Shreveport’s Dark City Poker League held a special tournament for its members to award three entries to ring events. James Rattanachi, Allen Presler and Matt Terral won the seats and will be sharing any winnings with those who participated in the qualifier.

“These are three of our best players,” Dark City’s Greg Shafer said. “They will definitely give the rest of the field a run for their money.”