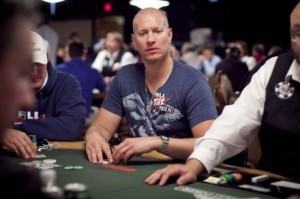 The first stop on the 2011-2012 World Series of Poker Circuit was held Sept. 8 to 19, 2011. The Horseshoe Bossier City casino in Louisiana played host for the first time and proved to be quite a successful stop. Billed as “12 gold rings in 12 days,” the first series of the new season saw 3,545 entrants competing for a combined prize pool of $1,703,525. In addition, attendance was up by an average of more than 100 players from last year’s first stop, the WSOP Circuit Council Bluffs, whose Main Event drew a modest 251 players.

On Monday evening, final-table play began at 7:30 p.m. and last six-and-a-half hours. It’s worth noting that Chris Gamboa earned the title of best all-around player at the Horseshoe Bossier City stop, earning an automatic seat into the WSOP Circuit National Championship. How? He placed third in the Main Event and ended up with three cashes, which were all good for 85 points.

Gamboa’s elimination left David Olson to do battle against David Nicholson, with the latter holding the chip lead at the start of heads-up play. The match lasted just 25 minutes, with the final hand coming after both players got all-in preflop. Nicholson’s

flop essentially sealed the deal, and after the

were put out on the turn and river, Olson was eliminated in second place, good for $91,971.

This was Nicholson’s first major tournament win, for which he collected the coveted gold ring and $148,590. Not only that, he also qualified for this season’s WSOP $1 Million Circuit National Championship. After the win, the 25-year-old, who has been playing poker professionally for about three years, said, “I’ve been out here grinding for a while. This really feels good to win. And to have my friends here with me really makes it special.”

Here is a look at the other gold-ring winners from the Horseshoe Southern Indiana stop:

There next WSOP Circuit stop will be held at Horseshoe Southern Indiana. The 12-tournament series runs Sept. 29 through Oct. 10. To see the complete schedule of events, please visit WSOP.COM.