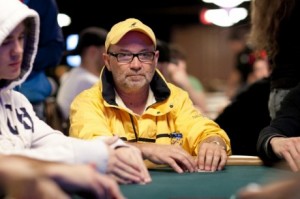 The survivors from the two Day 1 starting fields at the World Poker Tour Borgata Poker Open combined on Tuesday for Day 2. A total of 786 players returned to action and it was Abe Korotki leading the way with the overall chip lead — 260,100. At the end of the day, the field was whittled to 170 players and former WPT champion David Williams found himself on top with 727,100 in chips.

During Level 14 on Day 2, Williams began tweeting that he was chasing Vanessa Selbst. He eventually overtook her for the chip lead, taking the top stack into dinner. From there, his stack grew until he eventually finished the day as the only player over 700,000 in chips. Sitting behind him with sizable stacks are Maurice Hawkins, Eric Haber, David Diaz, Darren Elias, Erik Cajelais and Jack Schanbacher.

Selbst took a hit to her stack late in the day when she doubled up John D’Agostino. The money went in on the

flop, according to the WPT Live Update Team, and D’Agostino held

. Selbst had pocket tens. The turn brought the

With such a large field size returning at the beginning of the day, it was only customary that plenty of them had to hit the rail. Some of the notables who busted on Day 2 included, Gavin Smith, Hasan Habib, Ali Eslami, Allen Cunningham, Christian Harder, Tuan Le, Steve Dannenmann, Matt Matros, Maria Ho and Matt Brady.

and was up against Alex Queen’s

The money hasn’t burst yet and the line is set at 100 players. Along with the aforementioned big stacks still left in the field chasing Williams, Robert Mizrachi, John Racener, Matt Glantz, Lee Childs and Will “The Thrill” Failla are still alive.

Day 3 will commence at 1100 EDT (1900 BST) at the Borgata in Atlantic City. Be sure to stay tuned to PokerNews for the recap of the day’s action.