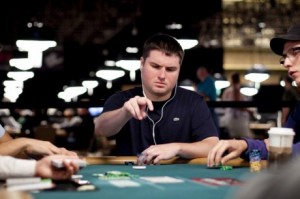 The Borgata in Atlantic City was alive again on Monday with Day 1b of the World Poker Tour Borgata Poker Open. It was a record-setting affair with the Day 1b field attracting 853 players, bringing the total field to 1,313. This event was held with a re-entry format and 143 players took advantage of that after busting on Day 1a.

One of those players who did just that turned out to be the end-of-day chip leader. Jeff Madsen busted on Day 1a but came back with a fury on Day 1b to bag up 216,925 in chips. He’s a bit behind the Day 1a chip leader Abe Korotki with 260,100, but he too pocketed $5,000 for ending the day with the most chips.

According to the WPT Live Update Team, Madsen scooped a big pot in Level 3 with the blinds at 75/150 to send two opponents to the rail and move to over 100,000 in chips. In the hand, Madsen opened with a raise to 300, and one player called before another three-bet to 1,125. Two players behind the three-bettor called, Madsen called and the initial caller called, sending five players to the

flop. After Madsen checked, the next player bet 2,100. The three-bettor raised to 6,100 and action folded back to Madsen. He reraised and made it 13,000 to go. The player after him then moved all-in for slightly over 20,000 before the third player began to tank. Eventually, that player moved all-in for 26,000 total and Madsen snap-called.

Madsen had flopped a full house with

, respectively. After the turn brought the

, Madsen won the pot and both players hit the rail.

Madsen wasn’t the only player taking a second chance in the event. A few other notables took advantage of the re-entry format including Allen Bari, Dan O’Brien, Chris Klodnicki and defending champion Dwyte Pilgrim. All fell short once again and will see their double buy-in have no chance of coming back to them.

Pilgrim was all-in on the flop with an open-ended straight draw against an opponent’s set of tens. The turn and river failed to give Pilgrim what he needed and he was sent to the rail, clearing his chances at a back-to-back title.

While those notables busted, others had solid days on the felt and finished with sizable stacks. They included Matt Affleck, David Williams, Mark Gregorich, Maria Ho and Robert Mizrachi. Jennifer Leigh rounded out the day as a severe short stack with just 5,900 in chips.

A total of 541 players made it through Day 1b and they’ll combine with the 245 survivors from Day 1a to return to play on Tuesday. The entire remaining field of 786 players will begin Day 2 at 1100 EDT (1900 BST) and the top 100 spots will be paid, earning at least $8,386 for cashing. Top prize is $922,441 and everyone will have his or her eyes set on working down to that ultimate goal. Be sure to stay tuned to PokerNews for the daily recap of the event.