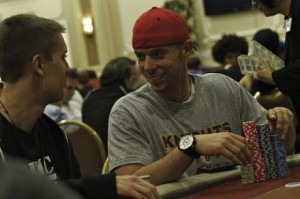 Day 2 of the second Epic Poker League Main Event has drawn to a close and only 23 players of the 50 who began the day remain. The chip leader heading into Day 3 is Fabrice Soulier, who finished the day with 453,500. Fabrice was involved in a few large pots including one early in the day where he knocked out Greg Mueller. In the hand, Soulier’s

on a board of

Near the end of the day, Soulier won a huge pot that sent Andrew Robl to the rail. On a board of

on the river improved Soulier’s hand further, sent Robl to the rail, and Soulier’s stack rocketed to 350,000.

Many well-known players were eliminated throughout the day, but some of the most notable included Phil Hellmuth, Mike Matusow, Tom Dwan, Ben Lamb, and Huck Seed.

Of the nine players who won seats through the Pro/Am Qualifier, only three remain in the field: current EPL card holder Nam Le and two "amateurs," Jaime Kaplan (who began the day as chip leader) and Sean Getzwiller. Kaplan was unable to maintain his momentum from Day 1 and finished the day with 245,000 in chips.

Only 12 of the remaining 23 players will make the money. Five of the players remaining in the field are going for their second EPL Main Event cash. Chino Rheem, the defending champion, and Erik Seidel, who took second in the inaugural event, along with Adam Levy, Isaac Baron, and Matt Glantz who finished in seventh, 10th, and 14th respectively.

Rheem has made an impressive showing in this event, so far. He was able to maintain a decent-size stack throughout the day. but took a hit when his

Dan O’Brien began the day second in chips and finished with 201,000. O’Brien, who kept a fairly low profile most of the day, was impressive considering that he held the chip lead for a long time. In one notable hand, he and Matt Graham raised back and forth preflop until Graham ended up all-in. O’Brien’s

were ahead of Graham’s

and the board ran out

sending Graham to the rail and boosting O’Brien’s stack to over 325,000. Near the end of the day, O’Brien flopped top two pair with his

on a flop of

and ended up putting David Steicke all-in. Unfortunately for O’Brien, Steicke had flopped a set with his

Day 3 will begin Thursday at 1200 PDT (2000 BST) at the Palms Resort Casino in Las Vegas, and it is sure to be an exciting day because both the money bubble will be broken and the final table of eight will be set! Keep following us here on PokerNews for all the updates.