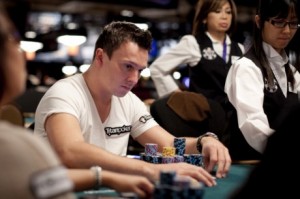 After almost 12 full levels of play on Day 1b of the Epic Poker League $1,500 Pro/Am #2, the second starting field of 53 players has been narrowed down to 11. Just because the field was on the small side, this did not mean that it was easy to prevail. A host of professionals turned out, many already a with an EPL membership card. Among these pros were David "Bakes" Baker, Layne Flack, Bryan Devonshire, Chau Giang, John Hennigan, David Singer, Dutch Boyd and Eric Buchman. There were also three World Series of Poker Main Event champions playing on Saturday: Huck Seed, Carlos Mortensen, and Jamie Gold, although, none of those world-class players were able to make it to Day 2.

In the end, it was Ryan Young, Tim West, Sean Getzwiller, Nam Le, Andreas Hoivold, Jeremiah DeGreef, JJ Liu, Brent Roberts and Michael Divita who are moving on to play on Sunday. Finishing on top, though, was Greg Mueller with 140,500 chips. He’ll be the overall chip leader going into Day 2.

Combined with the nine players from Day 1a, a star-studded field remains, few of whom would even consider themselves "amateurs." Headlining the Day 1a players to make it through is Phil Hellmuth, ending his Day 1a conquest with 27,800. He’ll be joined by Rep Porter, Matt Marafioti, Brandon Meyers, Russell Rosenblum, Christian Harder, Jamie Kaplan, Orson Young and Jeremy Ausmus who bagged up a Day 1a high 96,500 in chips. Ausmus will start in third place when the fields combine.

On Sunday, these 20 competitors will play down to nine. Each member of the final table will win a $20,000 seat into the Main Event, which starts Tuesday. More importantly, those who are not already EPL card members will need this achievement in order to even be eligible to play the upcoming Main Event. For those "amateurs," Sunday will be the key to poker’s most exclusive event and a chance to test their skills with the absolute best in the world. Plus they’ll have a shot as a large sum of money never hurts either.

Another story that developed Saturday is the overlay. Because 132 players are needed to reach the $180,000 guarantee, and drawing only 97 between both starting days, there is a significant amount of money that will have to be put up by the EPL, creating some great value for the players in the event.

Almost half of the remaining players will get their hands on $20,000, and with the field almost as good as the EPL Main Event itself, the action is sure to be intense. Day 2 begins at 1200 PDT (2000 BST) at the Palms Resort Casino in Las Vegas on Sunday. As usual, stay tuned to PokerNews for all the poker you can handle!