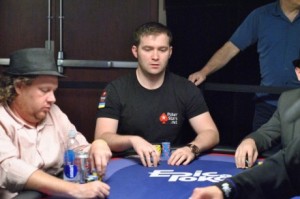 The Epic Poker League is back in action in Las Vegas with Friday marking the start of the $1,500 Pro/Am tournament for the second event. Day 1a concluded on Friday night. The original plan for the day was to cease play when 15 percent of the field remained, which would have been six players, but the tournament staff decided to halt play with nine players remaining from the 44 who began. Leading the way is Jeremy Ausmus. He was able to bag up 96,500 in chips after beginning the day with 10,000.

Ausmus got off to a blazing start early. He tripled up on the first hand of the tournament and ran away with things from there. Gavin Smith was one of the many players who felt Ausmus’ wrath in a hand the two played in the second level.

On the button, Smith raised the action and Ausmus defended with a call from the big blind. The flop fell

and both players checked to see the

pair the board on fourth street. Ausmus fired 350 and Smith made the call. The

fell on the river and completed the board. Ausmus fired 1,100 and Smith called. Ausmus tabled the

Not too long after, Smith hit the rail. He was all-in preflop with the

for Orson Young. Cue the bad beat, though, as the board ran out

and Smith was eliminated.

to give Meyers the win with two pair, aces and eights.

While Ausmus is topping the field after Day 1a, there are still plenty of notables moving on with him. Re Porter finished with 61,900, Phil Hellmuth bagged up 27,800 and Matt Marafioti wrapped up with 23,400. In ninth place overall and bringing up the rear with the short stack was Christian Harder with 14,000. They’ll all return on Day 2 on Sunday to continue play.

Day 1b will commence on Saturday at 1200 PDT (2000 BST) at the Palms Resort Casino in Las Vegas. Be sure to stay tuned to PokerNews for all the live coverage of the event.