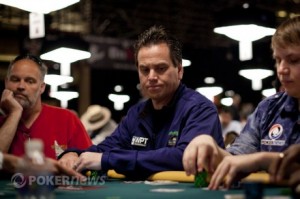 Each week, the Global Poker Index releases a list of the top 300 tournament poker players in the world. The cutoff for incorporating the weekly GPI standings is Monday, so the WPT Legends of Poker results aren’t reflected in this week’s standings. Still, there were many players who saw significant movement in their rankings. Here’s a look at this week’s GPI top 10. For a look at the entire list of 300, visit the official GPI website.

Changes in the Top Ten

Making his debut in the top ten this week is Scott Seiver. His second-place finish in the 2011 LA Poker Classic heads-up event fell out of his Period 1 results. However, it immediately counts toward his Period 2 because he only had one other cash in that span. With that extra finish now being calculated by the GPI, Seiver saw a solid gain this week.

Nine players, some of who had been on the GPI before, are new additions to this week’s list.

While there were no massive moves up the ranks this week, the biggest belonged to Ivan Freitez-Rosales. The 2011 EPT Grand Final champion doesn’t have any recorded cashes since then, yet still made the biggest jump this week. How is that? Previously with no cashes in his Period 2 calculations, Freitez-Rosales received a huge boost this week with his 16th-place result in the 2011 EPT Copenhagen Main Event moving from Period 1 to Period 2. That gives him three cashes still in Period 1, while finally giving the system a number to calculate for Period 2. Put it together and Freitez-Rosales is your big mover of the week.

Seeing his standing drop the most this week was Hungarian Andras Nemeth. There were two reasons for his fall. First, he only has three cashes since February. The first of those cashes no longer counts toward Period 1 since six months have elapsed. The second reason is similar to the first, with a cash changing periods. His 41st-place finish in the 2010 EPT Vilamoura Main Event now counts for his Period 3 results and not Period 2.

With the 2011 WPT Legends of Poker results counting toward next week’s rankings, you can bet that Will "The Thrill" Failla will improve upon his current 43rd-place position. The 2011 EPT Barcelona wraps up Thursday and will also count toward next week’s rankings. Eugene Katchalov is at the final table and just maybe, he’ll make a run toward the top spot on the GPI depending on his finish.

Erik Seidel, on the other hand, may fall from his No. 2 position. When the rankings are calculated next week, it will have been six months since his win at the NBC National Heads-Up Championship. That result will slip into Period 2 and will no doubt lower his Period 1 score. The same can be said for Jonathan Duhamel and Andrew Robl, the third and fourth place finishers in the NBC National Heads-Up Championship. How far will they all fall? We’ll find out next week.