Off the Felt with Matt Savage 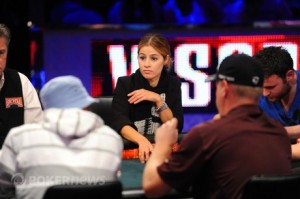 Off the Felt is interviewing your favorite people in the poker industry to find out more about their lives — you’ve got it — off the felt. We recently sat down with Matt Savage to talk a little poker, the Spice Girls, and if it "will ever end."

How did you get into poker?

Basically I was a bad player. I needed a job and I saw that the people who were working there were making so much money that I quit my job to go work in the industry.

Where is your favorite place to play poker?

Probably Bay 101 just because it’s home. I enjoy going there a lot. My friends are still there. I like to play where I’m from.

I’m gonna go with Monte Carlo because it is so beautiful there. I’m going back to the South of France to run the Partouche tournament coming up, so I’m looking forward to that as well.

If you could pick any musician to do a duet with, who would you pick?

I’m gonna say the drummer from my favorite band, which is Rush, and Neil Peart is his name.

Would you rather play a round of golf with Tiger Woods or play one-on-one with Lebron James?

Definitely Tiger Woods. I’m not a big basketball fan and I love golf. That would be my first choice.

If you had the chance to play anyone heads-up (dead or alive), who would it be?

Phil Ivey. Is he still alive? I haven’t seen him in a long time. I hope he is still alive.

What’s the most ridiculous story you’ve ever heard at the poker table?

You hear a lot of ridiculous things, but I did hear one that came up that you could probably do a story on it in itself. Somebody at this last World Series of Poker at the table was talking about what would it take for you to never use the Internet ever again in your life. This one guy said there is no amount, not even a billion dollars to stop using the Internet. It was interesting question but I thought it was pretty ridiculous that there was no amount that this guy would take not to use the Internet.

If they were to make a movie about your life who would you want to play you?

Brad Pitt because he’s the one I look the most like. A lot of people say I look like Jim Carrey and he’s funny so maybe Jim Carrey also.

Sweeter ride, the Delorean from Back to the Future or the Batmobile?

The Batmobile. I like Back to the Future, but I’ve seen the Batmobile in person and it’s definitely a much nicer car.

Can you name all the Spice Girls?

I can’t. I can only name Victoria Beckham, but I don’t even know her Spice Girls name. I know Posh too.

If you weren’t in the poker industry, what would you be doing?

Hopefully, something in the golf industry. Maybe running events or doing something for golf because I like playing golf more than I like doing anything.

When do you think "it will ever end?"

You’re talking about poker right? I don’t know. For Jason Mercier it doesn’t seem like it’s ever going to end that’s for sure. For poker in general, I don’t know. It is global now and getting bigger and bigger. I’m excited to be a part of it right now and I’ve been excited to be a part of it the last few years. I think poker is going to keep growing globally and I think that’s going to be good for poker overall.