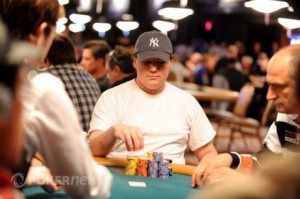 Each week, the Global Poker Index releases a list of the top 300 tournament poker players in the world. While there were no changes at the top last week, the poker world knew that there would be a shakeup at the top once the inaugural Epic Poker League Main Event concluded. Erik Seidel finished second, and remains in second. Jason Mercier, meanwhile, finished third and now holds first. Confused? We’ll sort it out for you.

First, here’s a look at this week’s GPI top 10. For a look at the entire list of 300, visit the official GPI website.

You may be asking yourself why Jason Mercier is holding down No. 1 and not Erik Seidel. After all, Seidel finished runner-up at the EPL Main Event and Mercier finished in third. Remember, the GPI calculations take volume into account by only figuring a player’s top three scores according to its formula over six half-year periods. With their respective finishes this weekend, Mercier and Seidel each knocked out a previous result from what had been their top three scores of Period 1 (which is weighted most heavily).

In Seidel’s case, his second-place finish in the 2011 WPT Hollywood Poker Open was bumped, leaving his second-place score in the EPL, his win in the $100,000 Super High Roller event at the Bellagio, and his NBC Heads-Up Championship title as his three scores counting toward his Period 1 calculations. Mercier, meanwhile, replaced his 14th-place finish in the $10,000 Stud World Championship this summer with his EPL score on Friday. That, along with his $5,000 PLO 6-max bracelet this summer and his victory in the NAPT Mohegan Sun High Roller Bounty Shootout, constitutes his three scores for Period 1. Mercier simply gained more points for his Period 1 scores than Seidel did, thus giving him enough points to jump to the top of the GPI.

There were eight new additions to this week’s GPI. Debuting in the highest spots of the bunch were Brandon Meyers and Hasan Habib. Excellent showings at the EPL Main Event are no doubt the reason for their standing. Habib’s fourth-place finish is only his second cash since the 2010 WSOP, so that in part explains why Meyers debuts 24 spots higher, despite finishing in ninth place. In addition to his EPL finish, Meyers boasts a fourth-place finish in the Bellagio Cup VII Main Event, as well a fourth-place score in the $2,500 Mixed Hold’em WSOP event this summer to fill out an impressive three score for his Period 1 calculations.

Clearly, a seven-figure score will help out your GPI standing. As a result, Chino Rheem vaulted the ranks this week by 101 spots for winning the EPL Main Event. Gavin Smith (5th), Isaac Baron (10th), Ted Lawson (12th), Noah Schwartz (13th), and Hoyt Corkins (17th), also saw their GPI standing rise thanks to their respective showings in the EPL Main Event.

David “Lefty” Diaz also rose significantly in the rankings this week. Aside from winning his first WSOP bracelet this summer in the $1,500 Triple Chance, Diaz took down another tournament a few days ago. He won the Main Event at the 2011 Gold Strike World Poker Open, good for $139,182 and a 68-spot jump on the GPI.

Falling the greatest this week was Shander de Vries. A 13th-place finish in the Main Event of the France Poker Series in February no longer qualifies for de Vries’ Period 1 results, thus the significant fall. Kristijonas Andrulis plummeted, as well. His best live cash, a win in the 2010 EPT Tallinn High Roller Event, is not counted as heavily anymore because it falls under Period 3, as opposed to Period 2. It’s the same story for 2010 EPT Tallinn Main Event Champion Kevin Stani. With the 2010 EPT Tallinn now more than a year in the books, his result also slips from Period 2 to Period 3.

With the inaugural Epic Poker League Main Event, EPT Tallinn, and LAPT Punta del Este now firmly in the rear-view mirror, let’s see what the second half of August has to offer. The WPT Legends of Poker Main Event kicks off next Thursday, while the APPT Queenstown Snowfest and EPT Barcelona Main Events get under way next week as well. Not too far in the future is Main Event No. 2 for the Epic Poker League. It’s set to begin on Sept. 6.