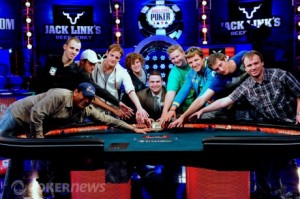 Each week, the Global Poker Index, releases a list of the top 300 tournament poker players in the world. Bertrand "ElkY" Grospellier has been holding strong to the top spot for the last few weeks, and the rankings for the week ending Aug. 8 are no different. New names have been added to the list, and some notables, like Jose "Nacho" Barbero, have dropped significantly in rank.

Here’s a look at this week’s GPI top 10. For a look at the entire list of 300, visit the official GPI website.

Bertrand “ElkY” Grospellier continues to sit atop the GPI with Erik Seidel, Jason Mercier, and Eugene Katchalov hot on his heels. The rest of the top ten remains the same, as well, with only Tom Marchese making a move in points, up 62 from last week. Next week, though, there is a good chance the top ten will change. At the time of writing this article, Seidel, Mercier and Katchalov are still battling among the 18 remaining players in the inaugural Epic Poker League event. With a big enough finish, all players have a chance to add to their Period 1 results (the heaviest part of the rankings weighing).

There was very little movement just outside the top ten, as well; however, McLean Karr did jump up two places, from 17th to 15th. He took down a 20-entrant High-Roller tournament in Macau to slightly increase his point total.

Seven new players cracked the GPI rankings this week, and deep tournament runs were a key reason why. What will a win at the Main Event of the European Poker Tour Tallinn do for you? Well, in Ronny Kaiser’s case, it resulted in a $395,740 payday and a ranking of #167 on the GPI. Sami Kelopuro took seventh in the same tournament, and coupled with two nice finishes at the WSOP, his Period 1 scores have helped boost him to 182nd place. Luca Pagano won the Main Event of the Italian Poker Tour San Remo to grab a spot on the GPI, as well.

Among those who fell off the GPI this week are Scott Clements, Micah Raskin, Tyler Smith, and Joao Barbosa.

On the flip side, the biggest drop this week belongs to Jose "Nacho" Barbero. It hasn’t been a strong six months for Barbero. He now was only two cashes that qualify for Period 1 since a third cash has slipped to Period 2, the significant reason for his drop this week. Jeff Madsen also fell substantially this week. His biggest score since his amazing 2006 WSOP came in early February 2010 at the Borgata Winter Open in Atlantic City. He took first-place for more than $625,000, but that score now falls in Period 4, rather than Period 3, and isn’t weighted as heavily.

With the inaugural Epic Poker League event wrapping up on Friday, the rankings will almost certainly see some changes next week. Could this be Bertrand "ElkY" Grospellier’s last week at the top? It very well might be. Who will take his place? It’s too early to tell, but there is no doubt that Erik Seidel, Jason Mercier, and Eugene Katchalov, are all very worthy of holding down the fort at the top.