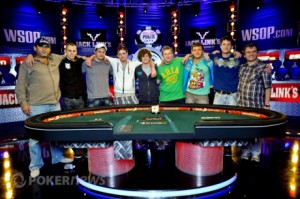 On May 1, 2007, the Woman in Poker Hall of Fame was founded by the Ladies International Poker Series, and was “designed to honor women in poker who have acquired prominence and have made contributions to the poker world.” Now, four years later, a new class of woman is being honored with induction into the WiPHOF: Kristy Gazes, Margie Heintz, and Phyllis Caro. We first told you about the Class of 2011 in the Aug. 4 edition of the Nightly Turbo, but now we’re going to delve a bit deeper into the inductees.

According to the WiPHOF Mission Statement: “The Women in Poker Hall of Fame is an association of poker players, people in the poker industry and other interested parties. We work to enhance awareness and to celebrate, contributions and achievements of women in poker as recognized and respected and proponents of women in poker.” While this year’s class may not be the most familiar to the poker masses, they certainly embody the characteristics of Hall of Famers.

You’ve no doubt heard the name Caro in poker before, but you most likely associate it with the notable author and “Mad Genius of Poker,” Mike Caro. While Mike isn’t eligible for the WiPHOF, his wife Phyllis certainly is. Born on June 17, 1947, Phyllis graduated from Hunter College in 1969. Ten years later, she ventured into the poker realm when she worked as a dealer at the El Cortez Casino in Las Vegas. That led to stints dealing in other card rooms, eventually leading to a chance meeting with her future husband at the Golden Nugget.

From 1984 to 1995, Phyllis worked alongside her husband at the Bicycle Casino in California, serving in a number of different poker capacities. She eventually parted ways, and in July of 1995, Phyllis became Director of Poker Operations at the Hollywood Park Casino in Inglewood, California, a position she still holds today. The success of that 60-table room over the past 16 years has been attributed to Phyllis’ intense dedication and knowledge of poker.

Phyllis Caro may only have a few notable cashes to her name, but her contributions to the game earned her a spot in the WiPHOF.

Credited with being the first woman to ever deal at the World Series of Poker, Margie Heintz has had a long and storied career in the poker industry dating to the early 1970s. Heintz was originally from Montana, a fact that would benefit her later in life, where she played and dealt poker in Billings. A year later, she relocated to Las Vegas and secured a position dealing at the Golden Nugget.

So how did Heintz earn the distinction as the first woman dealer at the WSOP? When the El Dorado Casino learned of Heintz’s nomination, they wrote a press release on their employee that told the tale.

“In 1977, famous rodeo cowboy and poker player Byron "Cowboy" Wolford suggested Heintz deal at the upcoming World Series of Poker at Binion’s Gambling Hall. When she went to inquire, she was told no woman had ever dealt the tournament or had even applied to deal before, so she went to talk to owner Benny Binion. The two hit it off immediately when she mentioned her Montana roots, and she was hired.

“Though many men playing in the 1977 World Series didn’t think she was capable, Heintz took the reins and ended up so highly recommended that she was invited to deal the final table. In front of a national audience covered by the CBS Wide World of Sports, Heintz dealt the championship round of the tournament, opening the door for women in the poker industry across the nation.”

Unlike Heintz and Caro, Kristy Gazes is a player first and foremost, with a laundry list of cashes to prove it. Her tournament results date to 1998 and total a staggering $1,026,056. That puts her 755th on the All-Time Money List, and 19th on the Woman’s All-Time Money List. Interestingly, fellow WiPHOF members Kathy Liebert (1st), Jennifer Harman (6th), Barbara Enright (12th), and Cyndy Violette (14th) are among the names ahead of her on the latter list.

Born on Oct. 28, 1967, Gazes began playing poker 25 years ago and is known primarily as a cash-game player. In fact, her nickname is “Mixed Games Gazes.” She was formerly married to poker pro Bill Gazes and became familiar to the poker public through television appearances on the Ultimate Poker Challenge and GSN’s Poker Royale: Battle of the Sexes.

Gazes has way too many accomplishments to list individually, so here are a few of the highlights:

Gazes, Heintz, and Caro survived the nomination process (which also included Nani Dollison and JJ Liu), and will be honored on Sept. 2, 2011, at the Golden Nugget Casino in downtown Las Vegas. Here’s a look at the exclusive company the three inductees will join in less than a month.

Woman in Poker Hall of Fame

The celebration will take place from 6 to midnight in the Grand Ballroom and will include the induction ceremony and a dinner celebration. WiPHOF member Jan Fisher will serve as Mistress of Ceremony, with a red carpet walk kicking things off. The event will not only honor the Class of 2011, but will also celebrate National Poker Month by raising money for the WiPHOF’s official charity, Poker Gives.

Poker Gives is a “charity organization whose mission is to provide financial aid and humanitarian efforts to mainstream charities through support from the poker industry. Collectively this industry and the players have an opportunity to actually make a difference and to create a better world by providing a variety of social services to those in need.”

Good news for those interested: the event is open to the public with tickets available on the WiPHOF website. The cost is $75 for dinner and ceremony tickets; $25 will get you into the ceremony only. In addition, there will be a silent auction with a variety of items. Finally, on Monday, Sept. 5, 2011, at noon, the Golden Nugget will host the Poker Gives Charity Tournament. The buy-in for that event is $125+$25, with 50 percent of the prize pool going to benefit PokerGives.org.