On the Button: Hollywood Dave Stann 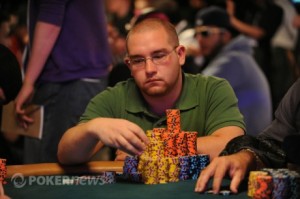 Never heard of Hollywood Dave Stann? Well, to blackjack players he’s a god. Known for his flamboyant hair and combative attitude at the table, Stann recently transformed into a student of poker (after getting tired of being thrown out of casinos) and has had some big scores in the past year. Ante Up’s Chris Cosenza was happy to see Stann sit next to him on a break at the WSOP, and they chatted about his struggles as a banned blackjack player, being Annie Duke’s pupil and how Black Friday wrecked his world.

You gained prominence as a world-class blackjack player, but then you became a poker player. Why? I can’t really play blackjack anymore. I’m friends with Annie Duke, and at the time we were doing the Ultimate Blackjack Tour, so I decided I would trade blackjack and poker lessons with her. She went on to win a decent amount in blackjack, but I more than made up for that. I made a ton more in poker so I got the better end of that deal for sure (laughs). … You know you can’t play blackjack anymore when you go to a continent that you’ve never been to and you check into a hotel you’ve never been at and they’re meeting you in the lobby and telling you that you can’t play.

What’s the best piece of poker advice Annie ever gave you? You respect certain things like position and the math, which doesn’t necessarily mean you can’t still be a complete maniac. It’s pure theory. So she might have given me her theory but she didn’t give me her playbook in terms of how she might play certain hands. So I guess if there’s one piece of advice I got from her that I incorporated into my own game it’s to never lose sight of the fundamentals, but within that you can make your game as wide or as tight as you want it to be.

You’ve been succeeding in mixed games as well, such as winning a H.O.S.E. title. What’s your favorite game? Razz baby! (laughs) I always say, and people think I’m joking, I always say, “Heads-up razz for rolls. Let’s play heads-up until one of us has it all.” (laughs) I played a lot, especially on UB, for the past few years, and for whatever reason, even though I was playing a lot of no-limit hold’em tournaments, when it came to cash games, I don’t know, I just didn’t like, “Let’s get it all-in online; let’s see what happens; let’s flip for our stack.”

I like having this slow-control edge over time with the limit mixed game. I just slipped into playing with two or three razz regulars there, not the best players, and for a couple of years I must’ve played like three or four tables a day heads-up for just hundreds of thousands of hands of razz. And there are so many multilevels of weird bluffs and semibluffs and things that people don’t even realize. … People tend to think of it as this boring game. … But because people haven’t really delved into it there’s such a sick edge you can get over time in that game that makes you almost unbeatable. I just wish it was more popular.

Greatest poker moment? I think it’s hard to point to one moment. … I’ve min-cashed in a lot of big tournaments that, going into that min-cash I was a monster favorite and got two-outed on the river. … and while I feel like that’s really frustrating, I also feel that, what a life, that a turn of one card can determine so much. And as much as I’ve done well and could be doing better at a turn of a different card, we live a career where we constantly over and over again put ourselves in a position where the turn of a single card means so much. And so many other people never get that chance. … that’s something I have to keep reminding myself as positive, even if I’m still searching for that elusive seven-figure cash. (laughs)

How did the online shutdown affect you? It really affected me. Aside from having my (UB.net) contract ripped up because I’m an American player, I was also working behind the scenes with UB to develop their tournament blackjack platform, which they had for years but were doing nothing with.

About eight or nine months before Black Friday they finally said, “All right, Dave, transform this; remake this.” We were two weeks away from relaunching, in my opinion, the coolest (site); weekly, monthly, guarantees, huge events, satellites into monster events, tons of promotion.

The press releases were written, the website content was all rewritten and ready to be refreshed at the push of a button. We were that close and all the affiliates were all lined up. So for me it was like nine months of serious behind-the-scenes work and I have nothing to show for it.