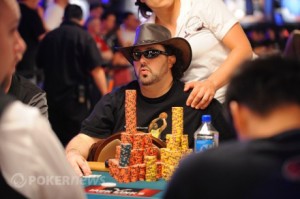 Lesniak, who managed to get legislation that would have established intrastate online poker within New Jersey passed last year only to have the bill vetoed by Gov. Chris Christie, wrote his own letter to Holder stressing that this assertion is "unsupported by fact or law."

The initial letter from Senate Majority Leader Reid (D-Nev.) and Minority Whip Kyl (R-Ariz.) chided the DOJ for previously allowing sites like PokerStars to operate in the U.S., asked for the DOJ to take an aggressive and consistent approach against "illegal" Internet gambling in the U.S. and to stop the spread of efforts to legalize intrastate Internet gambling.

"I wanted to respond to recent assertions made by U.S. Senators Harry Reid and Jon Kyl which were simply not supported by law, but instead seemed to be based on parochial interests," Lesniak said. "Under existing federal law, there’s simply no basis to deny New Jersey or any other state from establishing and regulating intrastate online gambling."

Before Black Friday, a letter with the message spread by Reid and Kyl would have created an uproar and backlash never before seen in the poker community. Given the current bleak status of online poker in the country after PokerStars, Full Tilt Poker and Absolute Poker/Ultimate Bet were forced out of the market, the letter makes little difference.

More important than the content of the letter was the indication that Reid and Kyl, previously one of the biggest advocates and opponents to licensed and regulated Internet poker, were attempting to find a common ground on the issue.

Still, the language in the letter was frustrating to the poker community. Lesniak used his letter to point out many of the same issues of the Reid-Kyl letter that irked poker players.

The senators’ assertion on intrastate gambling seemed particularly dubious, considering that the Unlawful Internet Gambling Enforcement Act, in which Kyl played a large role, specifically exempts online gambling at an intrastate level. Whatever Reid and Kyl wanted to say about gambling at the state level seemed inconsequential considering that there is no legislation currently at the state level that looks remotely good for poker players.

However, Lesniak wrote in the letter that he plans to introduce legislation that will address the governor’s concerns later this year. Though Lesniak’s previous bill passed through both sides of New Jersey’s legislature by wide margins, he would only reintroduce it if he had worked out a compromise with Gov. Christie that promised it would not be vetoed again. Lesniak’s original bill was the only legislation introduced at a state level to date that seemed like it would create a system in which players could thrive.

In the past, the DOJ has contended that intrastate online gambling is illegal under the Wire Act because, even if the gaming is intended to stay within the state, the Internet inherently crosses state lines unless some sort of closed system can be created.

Lesniak makes the logical argument that the Wire Act was intended to punish criminal enterprises utilizing telecommunications for sports wagering, not to prohibit state-licensed and regulated operations.

Lesniak also points out that the UIGEA contains no federal prohibition against Internet gambling, quoting the judge’s ruling in the Interactive Media Entertainment and Gaming Association’s lawsuit against the UIGEA.

Lesniak gets personal by offering that, if Holder were to take the Reid-Kyl letter on its merits, he would have to prosecute the Nevada Gaming Board in Reid’s home state for approving sports betting via mobile Internet within the confines of Nevada.

"New Jersey should decide for itself whether it wants to move its 20th century casinos into the 21st century," Lesniak said, "and the federal government shouldn’t try to stand in our way."