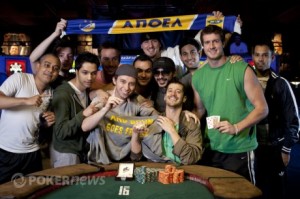 Poker players from across the country are getting ready for Casino Arizona’s seventh annual Arizona State Poker Championship at Talking Stick Resort in Scottsdale, Ariz., this month.

Director of poker operations Kent Odekirk said he’s hoping for at least 975 players in the $1,070 main event, which would surpass last year’s 900-player mark and push the prize pool past $1 million.

“We are expecting similar numbers this year,” he said.“Last year’s 900 entries allowed us to have a prize pool of $1 million, which we are continuing this year. Our goal is 975, but we welcome anyone and everyone to come to try their luck and skill. We see a great deal of players from Arizona, but as the championship has grown we have seen more and more players from out of state. In fact, they come from all over the United States and we have had many pros play in the past.”

“It has truly become one of the biggest events, not only for the poker room, but for Talking Stick Resort,” Odekirk said.

Defending champion is Ted Goldstein, a Phoenix resident who won $336,368 for first place as a 24-year-old.

“Last year was incredible,” Odekirk said. “I can’t image what it was like to be so young and win that much money. It was definitely an exciting moment for him.”

This year players start with 15,000 chips and a $15 staff-appreciation add-on earns you another 5K chips. Levels are 45 minutes with blinds starting at 25-50. And if you get eliminated early, Odekirk said there will be plenty of cash-game action.

“We will set aside tables for the tournament and we will continuously reconfigure the room as players are eliminated,” he said.“Additionally, we’re fortunate enough to have one of the biggest poker rooms in the state of Arizona so there is plenty of space for players to play who are not participating in the championship. We will havetables designated for those not participating.”

If you plan on traveling for this event the hotel offers a special tournament room rate, but you must be registered for the tournament. Call (866) 877-9897 for more details. If you’d like more information on the tournament call (480) 850-7777.