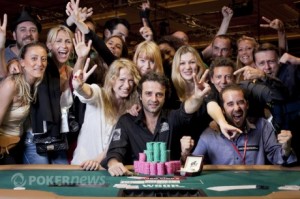 Day 4 of the 2011 World Series of Poker Main Event began with 852 players looking to first survive the richest money bubble in poker and then get down to making a serious run at the November Nine. Patrick Poirier and Daryl Jace started the day as the chip leaders, but as play continued past the money bubble, Manoj Viswanathan emerged as the man on top. Also, WSOP Circuit National Champion Sam Barnhart has started making his bid for the Main Event title. He led the field for part of Day 4 and finished the day second in chips.

Heading into action on Day 4, the big story was the impending money bubble. In the process of getting there, Phil Hellmuth made his exit from the Main Event. After Hellmuth raised to 12,500, Martin de Knijff three-bet to 32,500. Hellmuth made the call to see a flop of

. De Knijff bet out 30,000 and Hellmuth eventually moved all-in. De Knijff made the call and showed

gave Hellmuth some flush outs to go with his set outs. When the

hit the river, Phil Hellmuth’s run at a 12th bracelet ended short of the money bubble. Hellmuth’s exit opens the door for Ben Lamb to gain ground in the 2011 WSOP Player of the Year standings.

It took a little over 3 hours to get down to hand-for-hand play and it was nearly an hour before the bubble burst. Reza Kashani had the misfortune of going out on the bubble at the hands of Joseph Cheong. On a flop of

, Kashani moved all-in and was snap-called by Cheong with

for a set of queens. Kashani held

and was drawing to Broadway or a combination of running cards for either quad kings or kings-full. The turn

left the three tens in the deck as his only outs. The river brought the

to give Cheong quads and sent Kashani out as the bubble boy. As such, the remaining 693 players will receive a payday in the Main Event. As a consolation prize, Kashani was awarded a free entry into the 2012 World Series of Poker Main Event. Now the only thing he has to do is convince his family to allow him to come back. AP reporter Oskar Garcia spoke to Kashani after the bubble and it seems Kashani he told his family that he was in Jamaica instead of playing the WSOP Main Event. Of course, once they find out he has a free shot at millions in prize money next year, we expect they will let him come back.

failed to outdraw the pocket queens of Zaoui. Later, Poirier lost another half a million in chips to Sam Barnhart in a pot that saw Barnhart flop aces-up with

. Poirier managed to survive the day, but is now well below average with 335,000.

The aforementioned Sam Barnhart rode the strength of his million-chip pot with Poirier all the way to the chip lead for a portion of Day 4. Barnhart is the current WSOP Circuit National Champion and is looking for his second bracelet of the year. After surpassing a million in chips, Barnhart was moved to the televised featured table and quickly increased his stack to around 1.9 million. He remained in the chip lead for a good part of the evening but could never reach the 2 million mark. He finished Day 4 second in chips with 1.925 million.

Manoj Viswanathan had a strong run on Day 4 of the Main Event. He started the day with 414,500 and moved up to become the first player of the Main Event to move over the 2 million mark. He moved up into the chip lead in a pot against Patrick Shepherd. At the turn, the board showed

for two pair and Viswanathan held

for middle pair and a gutshot draw. The river brought the

giving Viswanathan the win and a chip-leading stack of 1.96 million. A bit later, Viswanathan pushed Aaron Ruppert off a nearly 300,000 pot with a pot-sized bet at the river to move his stack up over 2 million. Viswanathan finished the day as the chip leader and the only man at present with more than 2 million in chips. He will take 2,115,000 into action when players return on Saturday.

After four levels on Friday, 378 players remain in the WSOP Main Event. Several notable players still remain in contention for the bracelet. Lars Bonding finished seventh in chips on the day with 1.81 million. Bryan Devonshire and JP Kelly both finished in the top 20 in chips with 1.36 and 1.33 million respectively. Ben Lamb had a solid Day 4 and finished with 1.26 million. Jean-Robert Bellande has positioned himself for another deep run in the Main Event, finishing with 1.13 million. Pro Amanda Musumeci leads the remaining women in the field and will begin Day 5 with just over 1 million in chips. Other notables with a better than average stack include Joe Tehan, 2010 November Niner Joseph Cheong, Eli Elezra, Matt Stout, Sorel Mizzi, and Daniel Negreanu.

On Saturday, 378 players will return and play four to five levels as the pretenders are separated from the contenders. In addition, we will get a better idea of who will contend for title of "Last Woman Standing" as the field is thinned and we are left with our top female players.

After a brief hiatus, the PokerNews Podcast crew returned on Friday to talk about all the happenings of the WSOP Main Event. With the money bubble looming and several big names still in strong contention, they had plenty to discuss.

Find out what was said by listening here.

Team PokerStars Pro Vanessa Rousso chipped up nicely during the early levels of Day 4 in hopes of making a deep run in the Main Event. Lynn Gilmartin caught up with Rousso prior to the bubble bursting to find out how she amassed those chips and to ask her about her alter-ego DJ Rousso.