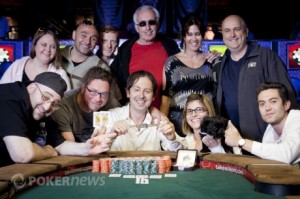 For the first time, a presidential candidate is openly campaigning for the poker-player vote. Former New Mexico Gov. Gary Johnson has set up a Web page targeting poker players.

"Support me for President, and I’ll support your freedom," Johnson is quoted as saying on the site. "The federal government should not be involved in restricting lawful commerce that doesn’t harm anyone."

The Republican candidate for 2012 asks players to "participate in your freedom" by pledging $25, $50 or $100 to his campaign by clicking on images that look like poker chips.

"He cares about this issue," said Poker Players Alliance executive director John Pappas, who had lunch with Johnson in Washington, D.C., last month. "He also realizes there is a serious voting block of people out there and believes that their ideologies, not just on poker but [on] other issues, probably align with his."

Johnson is expected to be in Las Vegas this week for Thursday’s beginning of the Main Event. He is scheduled to attend the TwoPlusTwo.com World Series of Poker party on Thursday night at the Wynn Poker Room and then be at the PPA booth at the Rio on Friday from 1 to 3 p.m.

For a presidential candidate to actively recruit support from the poker-player constituency shows how much respect poker and poker players have gained in D.C. over the past five years, even if the status quo remains bleak.

When the Unlawful Internet Gambling Enforcement Act passed in 2006, poker players were thought of as individuals and not as a group that could make a difference in politics and elections.

In 2008, although there were reports that Barack Obama played poker and considered himself a good player when he was on the presidential campaign trail, he never spoke publicly about poker. Poker players weren’t thought of as an influential enough group to risk taking a controversial stance.

Even today, only a fringe candidate would go out on that ledge to court poker players. But for any candidate at all to see value in the poker vote is progress.

Such opinions make him unlikely to gain the Republican presidential nomination. A recent Gallup poll listed him as ninth among Republican candidates.

But Johnson also seemed unlikely to become governor of New Mexico, which is overwhelmingly Democrat. Yet he got elected and re-elected for a second term. There are still seven months until the first primaries for poker players to help Johnson build momentum. For a fringe candidate, funding can make a big difference.

"He’s a down-to-Earth guy," Pappas said. "He’s real. He talks the talk and walks the walk. Whether his campaign has the ability to make a run at the nomination is still a question mark, but what he believes is very much aligned with my personal beliefs."

*Photo courtesy of The Daily Caller