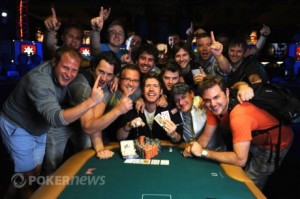 Day 33 of the 2011 World Series of Poker saw bracelets awarded in the $5,000 Triple Chance No-Limit Hold’em event, the $1,500 Pot-Limit Omaha Hi-Lo, and the $2,500 Mixed Hold’em event. The loudest bubble of the 2011 WSOP was reached in the $1,000 Ladies Championship as the field worked their way toward the final table. A field of over 1,900 players took to the felt on Day 1a of the final $1,000 No-Limit Hold’em Event of the summer. And finally, poker’s elite came together Saturday evening to kick off the most anticipated event short of the Main Event – the $50,000 Poker Player’s Championship.

The final four players in the $5,000 Triple Chance No-Limit Hold’em event returned on Saturday looking to take down the bracelet. Eric Froehlich was still alive in the event and looked to win his third career WSOP bracelet.

Froehlich was the first player eliminated from the final table. He picked up pocket jacks and shoved his stack of around 2 million in preflop and Antonin Teisseire made the call with

to give Teisseire the lead. Froehlich failed to get there on the turn or river and finished in fourth place.

Adam Geyer started the final table as the chip leader but took a massive early hit when Darryl Ronconi doubled through him after turning a straight against Geyer’s flopped set of fives. Geyer was left with 435,000 after the hand and had managed to double up to over a million before picking a bad time to shove. He shoved preflop with

and was called by Teisseire with

. The board failed to help Geyer and this event was down to heads up.

Darryl Ronconi led by 300,000 at the start of heads-up play with Antonin Teisseire, but Teisseire quickly took the lead and then stormed ahead to take a dominating chip lead. He was leading 10.5 million to about 1.5 million before the final hand. Ronconi moved in preflop with

and found himself dominated against the

of Teisseire. The board ran out

to give Teisseire the flush and the bracelet.

Antonin Teisseire won his first WSOP bracelet and France’s third bracelet for the Series. In addition to the bracelet, he received $825,604.

Read more about the final four in this event in our live reporting pages.

The unofficial final table of the $1,500 Pot-Limit Omaha Hi-Lo event started with David "Doc" Sands as a dominating chip leader with a more than 2:1 lead over the rest of the field. A huge pot between Sands and Jeffrey Gibralter, however, resulted in Sands losing that lead. On a flop of

for a nut-low draw only. Gibralter made the call with

for a pair, straight flush draw, and a nut-low draw. The board failed to bring any help for Sands, and Gibralter’s pair allowed him to move up to 1.46 million and knock Sands down to 360,000.

Sands continued to slide and was eventually down to 32,000 in chips. He was all-in preflop against Marco Oliveira, Jeff Gibralter, and Igor Sharaskin. The three stayed in the pot through the entire

for two pair and the nut low. Sands could not manage even a chop and the chip leader at the start of the unofficial final table failed to make the final table and finished in 10th.

Jeff Gibralter took a sizable lead heading into official final-table play. However, it was David Singontiko who dominated the table late. After taking out Thomas Scarber in fifth and Igor Sharaskin in fourth, Singontiko took more than a 1 million chip lead into three-handed play. He built a nearly 3:1 chip lead over the his opponents before Jeffrey Gibralter made a bit of a stand. That stand fell short, however, and he fell in third place.

Going into heads-up play with Michael Yee, Singontiko had an almost 10:1 chip lead holding 3.7 million to 375,000 for Yee. Heads-up play lasted a mere two hands as Yee got it in with

flop gave Yee a flush draw and low draw. Singontiko’s led with a pair to go with a straight draw and a better low draw. The

turn gave Singontiko his low and Yee picked up a straight draw, as well. The river,

David Singontiko decided to make this event his first WSOP tournament. It paid off in spades as he took the Event #51 bracelet and $268,235.

All the final table action can be found in our live coverage pages.

The final table of the $2,500 Mixed Hold’em event kicked off with Brandon Meyers with a 2:1 lead over Noah Boeken and the rest of the field. Both Matt Matros and Matt Hawrilenko made the final table and were both looking to win a second career bracelet.

Noah Boeken was knocked down to 130,000 early on and put that stack to risk during the no-limit round with

, only to run into Matt Hawrilenko’s

. Boeken flopped top pair when the flop came down

, but Hawrilenko picked up a straight draw. The

on the turn blanked for both, but the

on the river gave Hawrilenko his straight and shipped Boeken out in seventh.

Matt Hawrilenko ended up falling in third place against Matt Matros. On a flop of

for top two against the

of Matros. The turn

Heads-up play at this final was between Matt Matros and Jonathan Lane. Matros led 3.25 million to Lane’s 1.1 Million. Lane actually made a comeback and took the chip lead for a time, but Matros quickly turned things back into his favor after taking a series of pots. Lane was down to 850,000 prior to the final hand and shoved preflop with

. Matros woke up with

and had Lane dominated. The board ran out

Matt Matros won his second bracelet in as many years. Last year, he took down the $1,500 Limit Hold’em bracelet and this year he won the $2,500 Mixed Hold’em bracelet. In addition to his new hardware, he received $303,501 in top prize money.

More on this final table can be found in our live tournament blog.

Day 2 of the Ladies Event kicked off with 141 players looking to finish in the money in this event. Only 117 made the money and the situation at the bubble was one you don’t see in any other WSOP event.

During hand for hand play, Wendy Cordiner was knocked out when

was beaten by Sarah Herzali’s pocket nines. Gretchen "The Dragon Lady" Brummer stood up and asked the ladies if they wanted to donate $10 for the bubble girl. For the next few minutes, a couple of players went around gathering donations from players, and Cordiner nearly got her buy-in back because of the generosity them. Cordiner may have busted as the official bubble girl, but the generosity of the ladies in this event show why this is one of the more unique and special events of all the WSOP.

Play continued in this event and at the end of the day, 14 players remain. Valerie McColligan is the current chip leader with 482,000, followed by Katherine Stahl with 352,000. One male player actually remains in this field, and sits seventh in chips. He looks to set the dubious record as the first male to make the final table of the Ladies Championship. Of course, he will face 13 ladies who surely have a bounty on his head. Play will resume Sunday at 1430 PDT (2130 GMT).

For all the action from Day 2 of the Ladies Event, read our live coverage blog.

The final $1,000 No-Limit Hold’em event of the 2011 WSOP kicked off the first of two starting days on Saturday. A strong field of 1,932 players turned out for this event, and all were looking to make Day 2 for a shot at a deep run in this event.

After 10 levels, 306 players remain and Paul Volpe emerged with a solid chip lead over the rest of the field. He will take 124,500 into play Monday when the two Day 1 fields combine. Alexander Salabaschew is the closest opponent with 72,400.

Read more on Day 1 of this event in our live event blog.

The most anticipated event of the 2011 WSOP short of the Main Event is the $50,000 Poker Player’s Championship. This eight-game test of poker prowess drew an elite field of 128, 12 more than last year’s field.

As expected, a who’s who of poker turned out for this event. Instead of telling you who played, it is probably easier to tell you who won’t be back for Day 2. Only five players fell in Day 1 play because of the slow structure: Phil Laak, Arturo Diaz, Andrew Pantling, Jani Sointula and Eli Elezra.

After Day 1, 123 players remain with Doug Booth leading the field. Greg Mueller is right behind with 322,700. Day 2 of this event will begin the process of thinning the field as limits actually start forcing some of the shorter stacks to gamble. Action will resume in this event at 1500 PDT (2200 GMT) on Sunday.

Find out who all showed up to play on Day 1 in our live reporting blog.

The Ladies Championship will award its bracelet on Sunday. Action in Day 2 of the $50,000 Poker Player’s Championship will grind along as players settle in for the long haul. Finally, another massive field will descend on the Rio as Day 1b of the last $1,000 No-Limit Hold’em event of the summer kicks off.

You missed a lot if you didn’t listen to the PokerNews Podcast this week. In addition to discussing the relevant topics of the week, we were joined by guests Jay Rosenkrantz, Olivier Busquet, Jeff Madsen, Evelyn Ng and Kara Scott. Fear not, you still have chance to catch up on all you missed.

For any episodes you may have missed this week check out our archives.

The $50,000 Poker Player’s Championship took center stage on Saturday afternoon. Lynn Gilmartin caught up with several players before play began to get their thoughts on the event.