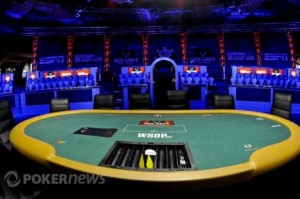 Day 4 of this $1,500 No-Limit Hold’em event started with four players returning to take their shot at the bracelet. Athanasios Polychronopoulos started the day with the chip leader and Yevgeniy Timoshenko was looking for his first WSOP bracelet.

Timoshenko started the day second in chips, but in just two hand he became the first player to fall at the final table. In the first hand, Simon Charette was all in preflop with

and Timoshenko had him dominated with

giving Charette two pair. It held to allow Charette to double up. Soon after, Timoshenko was all in preflop, but this time held

. Charette called and turned over

. The flop fell with a jack and Charette’s jacks were good enough to eliminate Timoshenko in fourth place.

Peter Ippolito then doubled into the chip lead when his

was able to out flop the

of Charrette. His lead was short lived as Charette doubled through Ippolito twice in a row, leaving Ippolito as the short stack. Ippolito was then all-in for just under 2 million when he shoved

from the small blind and Polychronopoulos called from the big with

. The flop missed both players, but the turn

meant the end of the line for Ippolito.

. Polychronopoulos got back to even a bit later when he managed a double-up with pocket fours against Charette’s

The biggest pot of the day was also the turning point of the match. Polychronopoulos was all in again with pocket fours and Charette made the call with

and Polychronopoulos called with

left Charette needed running nines or deuces to survive. The

on the turn sealed the victory for Polychronopoulos.

Read more on the final four of this event in our live reporting blog.

Day 3 of the $5,000 Triple Chance No-Limit Hold’em event started with 34 players looking to make the final table of this event. Vanessa Peng started the day as the chip leader and looked to become the fifth woman this series to make an open WSOP final table.

Vanessa Peng was able to make the final table of this event, but she was joined by former two-time bracelet winner Eric Froehlich. Froehlich started the final table third in chips and Peng started in fifth. Mikhail Yakovlev led the field with 2.34 million at the start of final table play.

Peng started the final table with 1.2 million and had a roller-coaster ride. At one point, she was the short stack and then after a couple of double-ups took the chip lead. She was finally down to about 1.5 million and open-shoved with pocket deuces. Darryl Ronconi woke up with pocket tens in the big blind and made the call. The flop of

sealed the deal and Peng finished in sixth place.

Play at this final table was suspended with four players left. Adam Geyer will head into the final day with 3.7 million in chips and the lead. Antonin Teisseire is right behind with 3.4 million. Darryl Ronconi will start with 3 million in chips while Eric Froehlich will come back as the short stack with 2.1 million. Play will resume in this event at 1430 PDT (2130 GMT) on Saturday.

Find out how the final table was reached in our live reporting pages.

Day 2 of the $1,500 Pot-Limit Omaha Hi-Lo event started with 134 players, and they all looked to try and make the money. Only 90 players made the money in this event, meaning 44 people would go home without a payday.

Jeremie Guez was the bubble boy for this event. Alex Wice made it 4,000 to go preflop and Kathy Liebert, Guez, and Alexandre Gomes all made the call. Guez was all in for just 1,200 of the 4,000 bet. On a flop of

, action was checked to Wice, who bet 4,500. Liebert raised the pot and both Gomes and Wice folded. Liebert showed

for the nut flush. Guez held

and needed both a two and a four to fall to give him half the pot. The turn brought the

and he was drawing dead and out as the bubble boy.

The eliminations in this event came at a breakneck pace and by the end of the day, the unofficial final table of ten was reached. David "Doc" Sands will start the final with 1.13 million and the chip lead. This is more than double his next closest opponent Jeffrey Gibralter with 514,000. Play will resume in this event on Saturday and will definitely play to a winner.

Find out how the "unofficial final table" of this event was reached in our live coverage pages.

Day 2 of the $2,500 Mixed Hold’em event started with 153 players hoping to make the money in the event and then move on to Day 3 for a shot at the final table. Justin Smith had the misfortune of finishing as the bubble boy of the event. He was all-in with

and called by an opponent with

to give both two pair, but Smith’s two pair was inferior and he hit the rail penniless.

Prior to the money, Mike Matusow and others were saying that the structure in the event was too fast for the chips in play. He may have had something there because something had happened on Day 2 of this event that had not happened but one other time this WSOP, the official final table was reached in this event.

Who made the money in this event? Find out in our live event blog.

The scenery at the Rio improved dramatically on Friday as the $1,000 Ladies No-Limit Hold’em Championship kicked off. A field of 1,055 took to the felt looking to take down the bracelet and the top prize of $192,344.

After 10 levels of play, Celine Bastian finished as chip leader with 79,000. Ruby Du is next in line with 67,800. Notable players with better-than-average stacks include Erica Schoenberg, Karina Jett, and Amanda Baker. Only 141 players remain, with 117 receiving a payday starting on Saturday. Play will resume at 1430 PDT (2130 GMT) on Saturday.

To read more about Day 1 of the Ladies Event, read our live coverage blog.

Three bracelets will be awarded on Saturday in the $5,000 Triple Chance No-Limit Hold’em event, the $1,500 Pot-Limit Omaha Hi-Lo event, and the $2,500 Mixed Hold’em event. The Ladies Event will play through what promises to be the most celebrated money bubble of the 2011 WSOP short of the Main Event. Finally, two huge events will kick off on Saturday. The last $1,000 No-Limit Hold’em event of the year will kick off with the first of two starting days. Next, one of the most anticipated events of the 2011 WSOP kicks off as poker’s best and brightest take to the felt in the $50,000 Poker Player’s Championship.

The ladies invaded the PokerNews Podcast on Friday. In celebration of the Ladies Event, the show was hosted by Kristy Arnett, Elaine Chaivarlis, and Lynn Gilmartin. After breaking down the latest news, including the potential sale of Full Tilt Poker, the ladies were then joined by Evelyn Ng and Kara Scott to discuss the Ladies Event, Game of Thrones, wearing patches, and quarter birthdays.

After 25 years of battling in the poker trenches, Leonard Martin has finally taken down his first bracelet after winning the $2,500 Limit Triple Draw 2-7 Lowball event early Friday morning. Sarah Grant caught up with him directly following his win to talk about his final table run, what it takes to be a Triple Draw Lowball specialist, and about his rail.