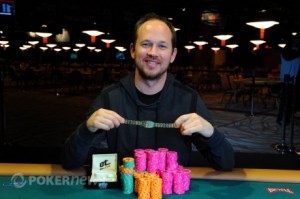 Nachman Berlin and Team PokerStars Pro Brazil’s Andre Akkari returned on Tuesday to battle heads-up for the Event #43 bracelet. Berlin led Akkari 9.46 million to just 3.4 million. Instead of a shove fest that many heads-up matches become, Akkari played a little "old school" poker and ground his stack and looked for spots to try and pick up chips from Berlin.

and Akkari made the call with

to give Akkari two pair and after the turn blanked for Berlin, the Brazilian contingent on hand in the Thunderdome erupted as their player pulled to about even.

After the double up, Berlin caught another rush and quickly chipped back up to over 8.6 million. It appeared that Akkari’s double up was going to be in vain until Berlin picked the wrong time to gamble. Berlin raised to 600,000 preflop and Akkari shoved for 5.29 million. Berlin tanked for a bit and finally called to show

. Akkari showed pocket kings and was looking to fade an ace. The board fell jack-high and Akkari’s kings held to now give him a 10 million to 2.2 million chip lead.

The final hand of the tournament saw Berlin shove his last 1.9 million chips into the pot preflop with

. Akkari made the call and showed

and the Brazilian crowd went ballistic as their hero was on the verge of victory. The turn brought the

and the Brazilian fans stormed the floor to congratulate Akkari.

Get all the details of this epic heads-up battle in our blog.

Stephen Su and Rep Porter returned on Tuesday to conclude their heads-up battle for the $2,500 Razz bracelet. Su led Porter 1.6 million to 1 million at the beginning of the restart. Porter was looking for his second career bracelet. On the very first hand of the day, Porter took the chip lead when Su’s big draw to a six-low failed to get there against a made nine for Porter. The script was now flipped with Porter leading 1.58 million to 1.1 million.

After that initial pot, it turned into the Rep Porter show. He built his stack up to over 2 million and Su kept treading water as he watched his stack swing between 300,000 and 800,000 time and time again. In the final hand Su put his remaining stack, just under 120,000, at risk with

and Porter called with

for a made ten and Porter held

for a made queen. Porter showed his seventh street card first and it was a

to give him a ninety-eight low. Porter needed any card from five to nine to double-up, but he turned over a

and Porter took the title.

Rep Porter won his second career WSOP bracelet with his victory in the $2,500 Razz Event and $210,615 in first place prize money.

Find out more on how Porter took down the title, read our live reporting pages.

Day 3 of the $1,000 No-Limit Hold’em event began with 21 players looking to make the final table and take down the bracelet. In just over three levels, the final table was reached with Jean Luc Marais as the chip leader with 1.8 million. Antonio Esfandiari was the featured headliner of the final table and started second in chips with around 1.5 million.

In just a couple of hands, Esfandiari went from the penthouse to the outhouse. Eric Baudry doubled-up through Esfandiari when he flopped a set with his pocket aces. Esfandiari held the case ace and was drawing dead when the money went in. This left him with 625,000 in chips. The next hand, after Ken Griffin raised under-the-gun to 80,000, Esfandiari decided to make a move from the hijack seat and shoved with

. Phillip Hammerling then came over the top all-in from the button and after Griffin folded, Hammerling showed

. The board fell nine-high and Hammerling’s ace sent Esfandiari out in seventh place.

Heads-up play in this event was between Kenneth Griffin and Jean Luc Marais. Griffin started the match-up as the chip leader with around 5.5 million to around 3.3 million for Marais. Griffin moved over 6.4 million in chips based on aggression alone before the final hand.

Marais decided it was time to play back at Griffin and decided to shove all in preflop to try and steal the blinds. He picked the absolute worst time to do so since Griffin had picked up pocket aces and made the insta-call. Griffin held

and needed a miracle. The flop fell

to give Marais some hope to a running straight or flush, but the

on the turn left him drawing dead and Griffin the victor.

For all the final day’s action, read our live reporting blog.

Day 2 of the $10,000 No-Limit Hold’em Six-Handed Championship started with 162 players looking to make a payday and earn their way to the final table. Only 48 players would be paid in this one. John Conkright was the unfortunate bubble boy in this event. He was all in preflop with

and ran into pocket queens from Chris Moorman. The board ran ten-high and remaining players were guaranteed at least $19,159.

Some of the players that finished in the money on Day 2 included Tom Marchese, Daniel Alaei, Sean Getzwiller, Phil Laak, Joe Cada, and Zach Hyman. At the conclusion of 10 levels, 22 players remain to return on Wednesday and play for the bracelet. Mike Sowers is the current chip leader with 1.46 million. Chris Moorman and Bertrand Grospellier are both right behind him with over 1.4 million each. Grospellier is going for his second bracelet of this WSOP, as is Ben Lamb who is still alive in this event but below average in chips.

All the details on Day 2 of this event can be found in our live event blog.

The second day of action in the $2,500 Omaha 8/Stud 8 event started with 201 player looking to cash in this event. As is customary in these short field limit events, the money bubble was burst near the end of the day. Jim Ferrel finished as the bubble boy. He was all in against both Michael Binger and Michael Mariakis preflop. His two opponents stayed in until the river when Binger bet Mariakis out the pot. Binger turned over a nut flush with a second nut low, and that was good enough to beat the two pair Ferrel had rivered. The remaining 48 players will all receive a payday in this one.

Nearly half of the field remaining after the bubble fell by the end of play on Day 2. Allen Kessler put on another min-cashing clinic and finished in 46th. Other players finishing in the money included Mickey Appleman, Peter Gelencser, Bart Hanson, Josh Arieh, Michael Leah, Perry Friedman, Jerrod Ankenman, and Dr. Jerry Buss of the Los Angeles Lakers.

At the end of the day, Michael Mizrachi emerged as the chip leader. He finished with 407,000, more than 100,000 more than Abe Mosseri in second place. Chris Bell, Barry Greenstein, Greg Jamison, Scotty Nguyen, and Brent Carter are all still alive in the hunt for this bracelet. Only 21 players advanced to Day 3 and they will return Wednesday to play to the bracelet.

Find out who made a payday and who will advance to Day 3 in our live coverage.

Another day, another $1,500 No-Limit Hold’em event. This time, 2,877 runners turned out for this event and all were looking to begin their march to another bracelet. Some of the players participating in this Day 1 field were Jeffrey Papola, Matt Affleck, Garry Gates, Tom Dwan, Sorel Mizzi, J.J. Liu, Eric Mizrachi, Liv Boeree, and Vitaly Lunkin.

Who advanced to Day 2? Find out in our live coverage blog.

The $2,500 Limit 2-7 Triple Draw Lowball event kicked off on Wednesday and drew a solid field of 310 players, an increase of 19 players year-over-year. As expected, another strong field came out for this one as pros and lowball specialists look to take down one of only four non-Hold’em events left on the schedule.

After a long day of play, 120 players advanced to Day 2. Jimmy Fricke finished as the chip leader with 69,700. Eli Elezra is currently in second with 57,100. Justin Bonomo, John Monnette, Galen Hall, and Greg Raymer are all in the top 20 in chips.

How did your favorite player fare? Read our live event coverage and see.

On Tuesday, the PokerNews Podcast crew discussed Ben Lamb’s win in the $10k PLO Championship, the $50k Poker Player’s Championship field size, and Day 1 the $10k NL Hold’em Six-Max event. They were then joined by Olivier Busquet who talked with them about betting on Connect Four, his move to Toronto to play online poker, and how live poker variance sucks.

You won’t know what was said unless you listen. Click here to listen.

Andre Akkari capped off an impressive comeback win in the $1,500 No-Limit Hold’em event. After his win, Kristy Arnett caught up with him and talked about his win and how the hard stop rule actually benefited him in his quest to win his first bracelet.