Jacksonville is a premiere poker destination 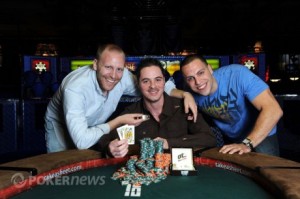 Get your pencils out and mark your calendars from Aug. 5-17. Those are the dates for the first World Poker Tour event in Jacksonville, Fla. Better yet, use a pen. Book your flights and hotels. And plan on making this trip three times a year (at least), as two more WPT series will be there (one this fall and one in April). Additionally, high stakes cash games will be played on a regular basis. As the cliché goes, “What a difference a year makes.”

For those who may have missed it, let’s go back a year in the time machine. Essentially, there was no real reason for poker players to travel to Florida. Buy-ins for cash games were capped at $100 regardless of stakes, so $1-$2, $2-$5 and $5-$10 no-limit hold’em games were spread but devoid of strategy. You practically had to commit your starting stack to the first pot you played. Similar prohibitive restrictions applied to tournaments.

All that changed last July when the Florida legislature removed the caps and extended poker room hours. With that singular stroke of then-Gov. Charlie Crist’s pen, given the incredible travel destinations, an abundance of wealth and a penchant for action, I submit the poker landscape in America experienced a tectonic shift. Overtures were immediately made by the WPT and WSOP to cement relationships with Florida poker rooms. I recall being bombarded with questions by players from all over the country: Where in Florida should I head? The common thought was South Florida, but that answer was too easy. Surveying the landscape, I had high hopes for Jacksonville and truly believed it had great promise on many levels. I could never have expected how quickly that hope would become a reality.

Obviously, Jacksonville is blessed with fantastic geographical advantages. A large city with a small town feel, beautiful beaches and weather amounts to a good start. Jacksonville Greyhound Racing, with two large rooms and a third one on the way adds to the equation. But the key to why I predict Jacksonville will become a truly premiere poker destination? Commitment and leadership.

The instant the Legislature removed the caps JGR president Howard Korman, COO Matthew Kroetz, CFO Jamie Shelton and the board of directors made a firm commitment to become the best Florida had to offer. They hired Deborah Giardina and Jesse Hollander, formerly of the Wynn, as executive director and assistant director of poker operations, respectively.

Having met some truly incredible poker operations teams throughout the industry (Ray Stefanelli, Tab DuChateau and Stan Strickland of Borgata come to mind), it was immediately apparent this was the case in Jacksonville. It took exactly one conversation with Giardina to know they are headed to the top. With the support and vision of the aforementioned executives, here’s a summary of what they have accomplished in just the past few months:

• State-of-the-Art THIRD poker room to host a televised WPT main event in the spring of 2012.

The above bullets are just the beginning. Yes, they treat their high-stakes players to the best amenities Jacksonville has to offer – beach-front hotels, limo service, catered meals. But they go beyond that; they make every patron feel like a V.I.P. and that’s because, in their eyes, that’s exactly what they are. And that’s a big part of why I am so excited about what is transpiring with poker in Jacksonville. I don’t make recommendations lightly, but booking a trip to play poker in Jacksonville is one of the rare sure bets in our industry.

— Randall S. Kasper, Esq. is co-founder of Poker Players International, the world’s largest poker agency (ppipoker.com). You can email him at randy@pokerplayersinternationa l.com.