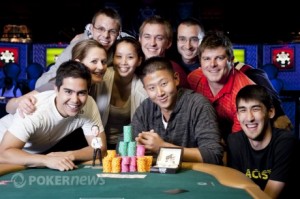 Did you know your opponents’ hands can be a valuable part of your investigation into their emotions at the table? Pay attention to their hands (and your hands) the next time you play.

I’m often asked what it means when opponents play with their chips. Chip shuffling is the most common action you’ll see at a table, but you’re focusing on this action, you’re most likely missing more important things. We have an orientation reflex toward movement so in turn we tend to pay too much attention to something that can be ignored.

We have to put these observations in context. Players routinely play with their chips; they’ll rearrange their order, move them from hand to hand, perhaps just to entertain themselves. Chip shuffling and tricks often are used to intimidate others.

Recent research says these actions pacify players, as any repetitive movement (leg shaking, arms stroking, playing with rings, curling hair) tends to calm us down. So, should we pay attention to this?

First, this shouldn’t be your primary focus; the whole body should be speaking to you. But if you insist on watching their digital movements, set your mind in the right place.

Pay attention to see how or when they play with them. If a player shuffles continuously, you can dismiss the action. His chip-shuffling is a repetitive motion that means little; it’s an amusement. If they stop playing with their chips after seeing the community cards, then this action has more meaning.

If they stop and later fold or stop and then raise, you’ll be given some additional insight into their hands. Given the nature of the game, most likely, you will see these behaviors again.

Besides chip-shuffling, you’ll often notice the shaking or quivering of a hand or finger. Our limbic brain, which handles emotions (a great hand or avoiding bluff detection), dumps adrenaline into our blood and that can cause hand tremors or erratic movements of the fingers and loss of smooth muscle movement. As mentioned earlier, put the action into context. When and why does it happen? I know when I get a monster hand my hands quiver because I get excited.

It’s important to assess everyone’s hand behaviors at the table and determine not only where players keep their hands, but if there are any tells they’re giving off (playing with rings, stroking fingers, biting nails, strumming table, etc.).

Hands may naturally shake because of stress, effects of caffeine (which really shows in my situation) or with the elderly or those with nerve or neurological damage. The best advice I have in this situation is to be prepared. Witness and analyze all hand behaviors and note whether the hands shake all the time or just when the player has a monster hand. Maybe they’ll shake when they are bluffing.

The thumbs also can tell a story, but how many players actually look at your thumbs during play? Believe it or not, you should be looking for the thumbs, though getting a solid look might take some maneuvering. So why is the thumb significant?

For example, if a player interlaces his or her fingers on top of their cards, watch the thumbs. If after looking at her hole cards or after the flop, they suddenly elevate their thumbs (a gravity defying behavior) chances are they have a strong hand.

We do this behavior often while talking and it’s one of the ways our brain shows emphasis. We don’t usually recognize that this is happening, but it is very accurate. The next time someone “talks with their hands,” take a glance at their thumbs and see if you can determine their confidence level based on the elevation.

How about picking at or biting fingernails? This repetitive behavior soothes the individual during stressful situations. Generally, people pick at their nails or cuticles to ease their concerns about an external situation. Return to the question of what does it all mean? We know that the player is pacifying themselves, but when does it stop or when does it come back and increase? Stress causes nervous gestures and ticks to increase.
So that’s it, right? Not a chance. Be observant of how men and women will slightly stroke the tops of their fingers with their other hand to comfort themselves (pacify) when they are unsure or nervous. This typically happens when they’re bluffing. When a player is weaker, watch the immediate movement of the fingers to the neck. This is another sign of insecurity, a sign of stress and weakness.

There is one more nonverbal that often escapes us and is not often discussed: When a player’s fingers withdraw from the table (particularly the thumbs when they tuck themselves in under the fingers), a player is feeling concerned about the current situation.

They have weak or marginal holdings and are slowly removing themselves away from the hand and their fingers represent their true emotions. Also, look for fingers that suddenly, perhaps after the player looks at the flop, distance themselves from the cards or begin to handle the cards with the fingertips rather than the full hand. This is another way of distancing and when weak or concerned.

So there you have it. The next time you’re playing take more than just a quick look at your opponent’s hands. Gauge their reactions and put what you’ve seen into context.

—Joe Navarro is a retired FBI agent and world-renowned expert on body language. His books, such as What Every Body is Saying and 200 Poker Tells, are available on Amazon. Email Joe at editor@anteupmagazine.com and he’ll answer your questions.