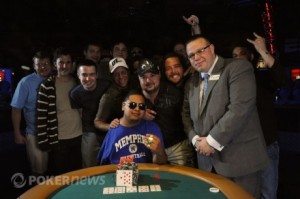 Day 26 of the 2011 World Series of Poker saw the Event #38 bracelet awarded and the $5,000 No-Limit Hold’em Six-Max event reach heads-up play. The $1,500 Limit Hold’em Shootout worked its way to the final table with three big names still in the hunt. Another sea of players converged on the Rio on Saturday and forced events to be pushed back, including the $2,500 Razz event that kicked off Saturday afternoon and the $10,000 Pot-Limit Omaha Championship, which fell just a couple of players shy of the money.

Arkadiy Tsinis and Michael Blanovsky returned on Saturday to complete their heads-up battle for the Event #38 bracelet. Tsinis started with 7.11 million vs. Blanovsky’s $2.765. Unlike other lopsided heads-up restart battles of late, the short-stack Blanovsky made a game of it.

After pulling the match back to nearly even, Blanovsky had dropped back to about 3.76 million when he found the right hand and the right situation to double-up in. Blanovsky had raised to 320,000 preflop when Tsinis decided to move all-in. Blanovsky snap-called and flipped over pocket kings. Tsinis was in a world of hurt with

and Tsinis had an open-ended draw to take the title. The turn brought the

and now Blanovsky had a more than 3:1 chip lead.

The very next hand saw Tsinis all in yet again. This time he was ahead with pocket sevens against the

of Blanovsky. An ace failed to come and Tsinis doubled up to take a single 110,000 lead over Blanovsky. It was at this point that Blanovsky made his first real mistake of the match up. At the turn, the board read

for queen-high while Tsinis showed

Blanovsky’s misstep left him with under 3 million chips and he continued to slide. With just under 2 million left in his stack, he called an all-in bet preflop from Tsinis holding

and Blanovsky was looking to double-up yet again. The flop

put Blanovsky in the lead, but by then Tsinis had 14 outs with an open-ended draw. The turn brought the

and Blanovsky was drawing dead. A meaningless

on the river made Tsinis’ bracelet victory official.

Read more about this spirited heads-up battle in our live coverage blog.

Day 3 of the $5,000 No-Limit Hold’em Six-Handed event started with 20 players looking to make the final table. Jonathan Duhamel and Matt Jarvis were both still alive in this event as well as Daniel Negreanu. Negreanu busted in 20th while Jonathan Duhamel finished in 15th.

At the start of heads-up action, Jarvis led Filtz 7.1 million to 3.79 million. This match-up proved to be quite the battle as Filtz stormed back to take the chip lead, followed by Jarvis taking back the lead, pulling ahead, and then Filtz storming back again.

Filtz was leading with over 6 million in chip to around 4.07 million for Jarvis when a monster pot gave Jarvis the lead yet again. Jarvis raised to 125,000 on the button, followed by Filtz three-betting to 550,000. Jarvis then shoved for his entire stack and Filtz called. Filtz was ahead with pocket sevens against

for Jarvis. A flop of

gave Jarvis a double gutter to go with his overcards. The turn

put Jarvis in the lead and his rail went ballistic. The

fell on the river and Jarvis doubled up to 8.15 million.

Play continued a few more hands before the 10-level rule forced this match-up to stop. Jarvis had chipped up a bit more and will take 8.64 million in chips with him into heads-up play on Sunday. Filtz will need to pull off another comeback with his 2.34 million stack if he hopes to win this bracelet.

For more on this final table, check out our live reporting pages.

Day 2 of the $1,500 Limit Hold’em Shootout started with 60 players looking to win their tables and make the final table. Ten six-handed tables were played to make the eventual final table of ten. Three big names earned their way to this final table, including $1,500 Stud bracelet winner Eugene Katchalov.

Katchalov won his table by defeating Sergey Rybachenko in heads-up play. The final hand of the match saw Rybachenko all-in with

. The flop missed both players but the

on the turn gave Katchalov the lead, and the

on the river sealed his win.

Hal Lubarsky made a stellar run in this event, winning his Round 1 table and making it to heads-up in Round 2 with Ari Engel The final hand of this match saw Engel put Lubarsky at risk on an

for a flopped flush. Lubarsky needed an ace or queen, but the turn brought the

to send Engel to the final table.

Jordan Rich is the other notable player to make the final. His final match-up with Dale Burner was won when Burner failed to catch with

. The final ten players will return on Sunday to play for the bracelet. Action resumes at 1430 PDT (2130 GMT).

For all the details on how the final table was reached, read our event blog.

Action in Day 2 of the $10,000 Pot-Limit Omaha Championship started with 156 players looking to make the money. The hard stop rule enacted for the 2011 WSOP actually prevented this from taking place on Saturday. Instead, players were only able to play down to 38 players, leaving two to be eliminated on Sunday in Day 3 play before beginning the march to the bracelet.

You can find all of the action on Day 2 in our live reporting blog.

Weekend warriors were out in force to battle in the latest $1,500 No-Limit Hold’em event. A field of 2,857 players took their seats on Saturday and as has been the case with many of these lower buy-in hold’em events, other events had to be bumped back a bit to accommodate the field.

Players in this event dropped faster than Fannie Mae share prices and by the end of the day, 385 players remained. Age Spets finished the day as the leader with 119,900 in chips. David Baker is 10th in chips.

To find out how your favorite player fared on Day 1, read our live coverage of the event.

The $2,500 Razz event is the last stud variant bracelet on the 2011 WSOP schedule. A field of 363 turned out for this one, just two players shy of last year’s total. This event kicked off late due to the field size of the $1,500 No-Limit Event, but once it kicked off it seemed that players were willing to gamble.

Something you don’t see every day is a stud event lose more than half of its field on Day 1, but that’s what happened Saturday. Only 166 players remain in this event after one day of play. George Lewis leads with 44,300 with Hoyt Corkins, George Lind III, Chau Giang, John Monnette, Chad Brown, Frank Kassela, Shawn Buchanan, and Jimmy Fricke all in the top 10.

We never lowball you on coverage. Read more on Day 1 action in our blog.

To catch up on any episodes you may have missed, check out our archives.

Arkadiy Tsinis took down the Event #38 bracelet on Saturday. Directly following his heads-up victory, Sarah Grant caught up with him to find out how he came to poker from backgammon. We also found out that Tsinis almost skipped this event in lieu of a limit tournament.