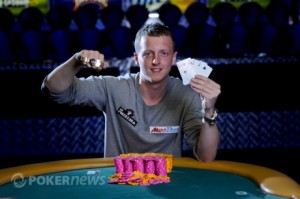 Day 25 of the 2011 World Series of Poker saw three bracelets awarded, highlighted by the awarding of the $10,000 H.O.R.S.E. Championship bracelet. A fourth bracelet was scheduled to be awarded but was stopped short by the dreaded 10-level rule. Also, Phil Hellmuth looked to make another run at bracelet #12 in the $5,000 No-Limit Hold’em Six-Max event. Finally, both the $1,500 Limit Hold’em Shootout and $10,000 Pot-Limit Omaha Championship began play on Friday.

Five players returned on Friday to play to the bracelet in the $2,500 No-Limit Hold’em event. Thomas Middleton started with the chip lead while Eddy Sabat was at his first WSOP final table and started the day as the second short stack.

Sabat was the first player knocked out. He suffered a huge suckout loss to Thomas Miller that left him crippled, and then was forced to gamble with

During three-handed play, Mikhail Lakhitov went from short stack to dominate chip leader. Lakhitov doubled-up through Hassan Babajane to take the chip lead after flopping a set of deuces. Next, he won the largest pot of the tournament against Thomas Middleton. Middleton decided to shove preflop with

and Middleton made the call with pocket tens. The flop

gave Lakhitov top pair, and running spades on the turn and river gave him an overkill flush and 11 million chips to start heads-up play.

Hassan Babajane took 1.9 million in chips into his heads-up battle with Lakhitov. A few hands in, Lakhitov moved all in with

and Babajane made the call with

gave Babajane a flush draw, but Lakhitov stayed in the lead. The turn

failed to complete Babajane’s flush and Lakhitov took the bracelet.

Fabrice Soulier and Shawn Buchanan returned on Friday to conclude their heads-up battle for the $10,000 H.O.R.S.E. World Championship bracelet. Soulier started with 6.29 million in chips to Buchanan’s 910,000.

It didn’t take long for Buchanan to get his stack in the middle. During the Omaha hi-lo round, Buchanan called a raise preflop and the flop fell

. The two raised each other until Buchanan got the rest of his chips into the middle. Buchanan showed

for a pair and straight draw while Soulier showed

for a better straight draw, middle pair, and a low draw. The turn brought the

and Soulier picked up additional outs to Broadway. The

fell on the river, giving Soulier two pair and the title.

You can read about this match-up and more in our live reporting blog.

Day 3 of the $1,500 No-Limit Hold’em event started with 23 players and Perry Lin as a solid chip leader over the rest of a young and relatively unknown field. Around the middle of the day, the final table was reached and Lin still held a 700,000 chip lead over the rest of the field. After the elimination of a couple of players, Arkadiy Tsinis had taken over the chip lead, but Lin was still solidly in second place. That was until a pair of hands against Randolph Lanosga resulted in an early exit.

The first hand saw Lanosga all in for around 1.4 million on an

and it looked as if he would take back the chip lead. The turn

, which isn’t a bad hand to take a stand with. Lin moved in, and much to his chagrin, Lanosga woke up with pocket jacks. The jacks held and the player that led most of the day hit the rail in sixth place.

In less than three levels, play at this final table reached heads-up between Arkadiy Tsinis and Michael Blanovsky. Tsinis led with 5.9 million to Blanovsky’s 3.96 million. Blanovsky rode a seesaw through most of heads-up play. Tsinis built his stack up to between 6 or 7 million and Blanovsky doubled-up or won some pots to make a threat to even up the match. This continued until the end of the night when the 10-level rule forced this match to be completed on Saturday.

Arkadiy Tsinis finished the day with 7.1 million in chips. Michael Blanovsky will try and stage a comeback with his stack of 2.76 million. Play will resume at 1430 PDT (2130 GMT) on Saturday and continue until a bracelet is awarded.

Who will take the bracelet? Follow along in our blog.

The final day of the $2,500 Pot-Limit Hold’em/Omaha started with 22 players looking to take down the only HA bracelet in this Series. By the time the final table was reached, Tyler Patterson held a 2:1 chip lead over the rest of the table. He had 1.3 million and his next closest competitor, Mitch Schock, held 648,000.

Seldom does the turning point of a final table happen with five players remaining, but that is exactly what happened in this one. Mitch Schock in the course of a couple of hands went from the second short stack to an overwhelming chip leader. First, he doubled up through Carter Gill. Gill four-bet shoved preflop with pocket jacks and Schock made the call with pocket queens. The queens held and Schock was up to 1.5 million.

At this point, Tyler Patterson was in second place with around 1 million in chips. He and Schock got involved in a pot that resulted in Patterson’s elimination. On a flop of

, Schock check-called a 55,000 bet from Patterson and both saw the turn of the

. Schock checked and Patterson bet 125,000. Schock then check-raised to 450,000 before Patterson shoved for his tournament life. Patterson held

for top pair but Schock held

for two pair. The river

eliminated Patterson and Schock held 2.52 million, more than the other three players combined.

Heads-up play in this event was between Mitch Schock with 3.24 million and Rodney Brown with 1.3 million. While it seemed that Schock might make this an early night, Brown had other plans. In a matter of 20 minutes, Brown had managed to double up and then some to take a 3:1 chip lead of his own against Schock. He grinded Schock down to just 600,000 before the tide turned back in Schock’s favor.

Schock managed a double up of his own to pull back within even and then started to catch fire again during a PLO round to pull away. Play was down to the last level of the night and Brown still had around 1.6 million in chips. Many expected the 10-level rule to be enacted, but a massive pot decided the winner. On a flop of

for an over pair, gutshot straight draw, and the nut flush draw. Brown held

for a wrap and top pair. The turn

gave Schock his flush, and Brown was drawing dead.

Read more about this final table in our live blog.

Day 2 of the $5,000 No-Limit Hold’em Six-Handed event began with 172 players and from the opening bell, the action was insane. The money was reached relatively quick in this event and among the players cashing early in the event were Jason DeWitt, Lisa Hamilton, Daniel Alaei, and Shaun Deeb. Phil Hellmuth battled for a good portion of the day and was hoping to make yet another run at a bracelet, but his run ended up falling short and Hellmuth finished in 36th.

Justin Filtz went on a tear in Day 2 action and not only took the chip lead but amassed nearly a 1 million chip lead over the rest of the field. He will start the final day with just over 2 million in chips. Massimiliano Martinez is the next closest opponent with just over 1 million. Matt Jarvis, Kevin Iacofano, and Jude Ainsworth all round out the top five. Only 20 players remain to return on Saturday to play to the bracelet. Action resumes at 1430 PDT (2130 GMT).

Who finished in the money? Read our live reporting pages to see.

The $1,500 Limit Hold’em Shootout kicked off on Monday and drew a solid crowd of 538 players. Advancing to Round 2 in this event would not only leave players just two tables from a bracelet, but also secures them a cash in the event.

Find out who advanced to Round 2 in our live event coverage.

The $10,000 Pot-Limit Omaha Championship kicked off on Friday and drew the largest World Championship field thus far in the Series. A field of 361 players registered in this event, up 15 from last year’s total. Anyone who is anyone in the poker world was in this event, and that fact was evident on the end-of-the-day leaderboard.

After 10 levels, the field had been cut in half with 170 players remaining. Manny Jo is the current chip leader with 226,700. Some of the names near the top of the leaderboard include Sami Kelopuro, Ben Lamb, Tom Dwan, Max Pescatori, Vanessa Selbst, Peter Jetten, Tom Marchese and Matt Glantz.

Play will resume at 1500 PDT (2200 GMT) on Saturday and will play through to the money and start working toward the final table.

For all of the Day 1 action, read our blog of the event.

Event #38 will crown its champion on Saturday and another bracelet is scheduled to be awarded in the $5,000 No-Limit Hold’em Six-Handed event. The $1,500 Limit Hold’em Shootout will play to the final table while the $10,000 Pot-Limit Omaha World Championship bursts the money bubble. Also, two new events will get the weekend started. Another massive field is expected at the Rio for Event #43, another $1,500 No-Limit Hold’em. Later in the day, players will take their seat in the $2,500 Razz Event and start their march to taking down the final stud bracelet of the series.

On Friday, the PokerNews Podcast crew broke down Tom Dwan’s final table appearance and then spoke with Caesars Entertainment Communications Director Seth Palansky about the growth of the WSOP. L.A. Lakers owner Dr. Jerry Buss then joined the show to give his insights into the importance of poker and its future marketability.

Find out what Buss said by listening to the PokerNews Podcast here.

Fabrice Soulier took down the $10,000 H.O.R.S.E. World Championship on Friday, and Sarah Grant caught up with him directly after his bracelet win.