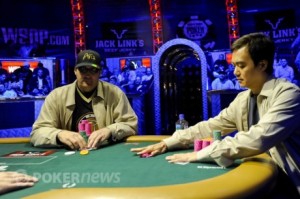 Chris “Fox” Wallace is an instructor at pokerXfactor.com, a poker coach, an author of a poker book and yet he still manages to make most of his money at the poker tables. And now local Minnesota players will have the opportunity to tap into his expertise by attending seminars each month at Running Aces Harness Park in Columbus, Minn.

Wallace didn’t begin his career as a poker pro; he had a successful career building custom acoustic guitars and managed to make a little extra money on the side counting cards at the blackjack tables.

But the better he did at blackjack, the more likely he was to be thrown out of a casino. And then he developed an allergy to exotic hardwoods, which brought his guitar-building days to an end. It was at this time, about eight years ago, when he went to see his friend, Adam Stemple, who told Wallace he should take up poker.

“I’ve never been thrown out of a poker room for being too good a poker player,” Stemple said. So he loaned Wallace a couple of poker books and he became a student of the game.

Wallace started out playing limit hold’em at Canterbury Park and then expanded his game to playing online. Wallace and Stemple started FoxPoker.net in 2005, which was one of the earlier online poker training sites. In 2008 pokerXfactor.com acquired FoxPoker.net and they have been instructors there since. In addition Wallace has done a lot of one-on-one coaching with hundreds of students, teaching online and live poker. He has spent the past several years collating the information he’s developed from training and coaching into a book.

With Stemple’s help he wrote No Limits: The Fundamentals of No-Limit Hold’em, published in 2010. More information is available at nolimitsbook.com.

In May, the guys started hosting seminars at Running Aces Harness Park. You can sign up for these instructional events at propokerseminars.com.
I attended their first event and it was immediately apparent they really enjoy teaching. They’re knowledgeable and energetic, and they share several concrete examples and teach you not just what to do, but why you should do it. As Wallace said, “There is not a system to beating the game.” So instead they talk about several poker concepts and how each of them works together.

This was more information than would fit into the scheduled two hours, so they took some additional time giving extra value for your training dollar. The seminar was packed with lots of good information. You can attend a seminar for $99, less than the price of a full buy-in at the $2-$60 spread-limit tables. Be sure to check out propokerseminars.com for information about upcoming seminars.