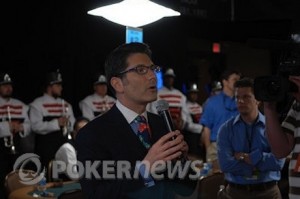 With the World Series of Poker wrapping to a close, the Las Vegas poker landscape will start to return to normal, and the typical tourist and local action will return to the many convenience rooms around town. Of the 58 poker rooms in the Las Vegas area, all but five (Aria, Bellagio, MGM Grand, Venetian and Wynn) have a jackpot drop in their cash games. It’s usually a dollar taken when the pot reaches $10. Jackpot drops are common, but the way the money is distributed varies greatly.

First, the fallacy the house is making money off the jackpot drop needs to be addressed. Nevada Gaming Control Board fiercely regulates the jackpot drop in all Nevada casinos and requires, without exception, 100 percent of the money taken from a pot for a jackpot must be returned to the players.

No percentage whatsoever may be retained for “administrative costs” or as a supplemental house rake out of the games. This is not the case in many other jurisdictions. Having said that, so long as the money is returned, in full to the players, the NGCB is liberal in how that money is returned. It’s most commonly used for high-hand jackpots, bad-beat jackpots or freeroll tournaments, but it can be used to purchase “prizes” for players or for entry into larger tournaments (i.e. seats at major tournament events). How a room decides to distribute the jackpot money is at its discretion.

Another common fallacy is the money needs to be returned in full to the players every day. This is not the case, and few to no rooms do this. Most rooms maintain a jackpot “reserve” that can range from a few hundred to $100,000 or more. Though it is required that all money be returned to the players, there is no real requirement it be returned in a set period of time. Some rooms choose to maintain a large reserve so they’re able to run things such as large $100K guarantee freerolls or to fund jumbo high-hand jackpots. Once again, this is at the discretion of the room.

Though the vast majority of jackpot rooms drop one jackpot dollar, two rooms drop more (that this writer is aware of). As of this writing, the Luxor drops a $2 jackpot (with the second dollar taken at a higher pot amount than the first dollar). Also, most to all rooms don’t drop a jackpot dollar if a flop is not seen (since a jackpot is not possible without a flop), but at least one room (Mandalay Bay) drops a jackpot even if a flop is not seen.

Another way the Vegas jackpot drop is differentiated from other jurisdictions is regarding joint-property promotions. It’s common in Las Vegas to have multiple properties owned or managed by the same company combining their jackpot drops and offering a joint property promotion. Stations Casinos, which cater mainly to locals, is the best-known example of this.
By combining the jackpot drop from their many properties, they can offer oversized bad-beat jackpots (usually starting at $100K or $150K) and large joint-property freerolls with prize pools ranging from $100K to $300K and guaranteed money to every player who qualifies. When a BBJ hits at a Stations property, every player in a cash game at every Stations casino wins a share, starting at $200. Joint property promotions are significantly less common on the Strip, and usually are reserved for the locals’ casino market.

On the Strip, the most common way jackpot money is distributed is through high hands as bad-beat jackpots are less common. Freerolls are making a comeback on the Strip, however, and are commonplace at a few properties, including Treasure Island, which offers a weekly $2,500 guarantee freeroll with 10 hours of cash-game play throughout the week.
High-hand jackpots are quite popular with rooms since it excites players to win a jackpot for making tough hands. The poker rooms are always trying to figure out new ways to make these jackpots more exciting. Some of the more interesting rooms include Mirage, which pays a static amount for quads and straight flushes, but has a daily Flopped Royal Jackpot that starts at $5,000 and often eclipses $10,000. Bally’s and Planet Hollywood took it a step further and awards not only a large progressive royal, but gives a share to everyone at the table playing in the game.

Being that the majority of the Las Vegas area poker rooms drop a jackpot, it’s good to know what entices you as far as jackpot promotions so you can plan accordingly. Now get out there and flop that royal!

— Michael Hamai (a.k.a LasVegasMichael) resides in Las Vegas and is Content Manager and Editor of AllVegasPoker.com. You can follow him on Twitter @LasVegasMichael or email him at MichaelHamai@aol.com.