Isle Black Hawk strives to be No. 1 in Colorado poker 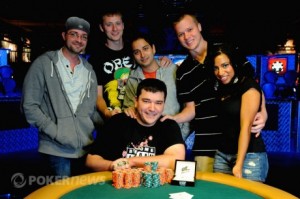 You can’t miss the pioneer spirit as you head west, scaling the foothills toward Black Hawk and Central City, Colo. You’re about an hour west of Denver, climbing to an elevation of 8,000 feet as you drive up Highway 119. Once you’ve passed the city of Golden, the home of Coors Brewing, you’re out in mining country for a good while. Your mobile phone signal drops out, the only sign of life around you a roadside babbling creek.

During the Colorado Gold Rush of the mid 1800s, prospectors flooded this region in search of big money, and there might be a metaphor in there somewhere. These days, people still travel to the region in search of riches, but they aren’t looking for gold unless three bars pop up on video slots.

For 20 years, Black Hawk and Central City have been home to dozens of casinos, many of them small, but others quite grand — the most obvious being Black Hawk’s towering, 33-story Ameristar Resort Casino Spa. Black Hawk itself, which boasted a resident population of all of 114 people as of 2009 (it’s the state’s least populous city), actually has more casinos — just going by quantity — than Atlantic City.

That’s a work in progress, because the poker room only opened April 12. I talked with Isle poker manager Matthew Dodd about the challenges of attracting players in an established market and his philosophy for how to get them in and bring them back.

“We really want to cater to the serious poker player,” Dodd said, noting that only a few other casinos in Black Hawk have more than a handful of tables and run games regularly. (The Lady Luck casino, attached with a skywalk and owned by Isle, has six tables.) “We have everything you need up here, except a smokers patio, and we’re about to open that, too.”

The “up here” thing is a distinction that will go a long way with serious poker players, the ones who come to the casino specifically to play cards, a segment that’s grown ever-larger since Black Friday. “Up here” is the Isle’s poker room, and it’s inarguably impressive. To get there, you take a steep escalator (or the elevator) from the casino floor to an upper level that connects with the hotel. The poker room is on the left, and it’s large and lush while also remaining understated and professional. This isn’t ritz and glitz; it’s a professional area for serious players. The sound and fury of the video slots and other games below vanish up here. It’s an experience unto itself, entirely separated from the casino floor, and that’s exactly how the Isle wants it.

It’s a great area, no question. Large windows allow the players to take in the gorgeous view of the mountainside, giving the room an open feel, but Dodd also had the windows tinted a bit to mitigate the glare. The poker room has an exclusive full bar, servers and bathrooms. By the time you’re reading this, as Dodd noted, it will have a smokers patio, too. An assortment of food, including Chinese and Vietnamese cuisine from the in-house Orchid Garden restaurant, can be ordered from the table. The 11 tables are pristine, and the chairs are so comfortable you can sit in one for an hour and not even think about it, until Dodd mentions the price, and you understand: “They’re designed for sitting for a long time.”

Having a great room is one aspect to trying to break into a new market, but there are other aspects to trying to drive action over to the Isle, Dodd said. They include:

FLEXIBILITY: When the Isle opened, the tables used a live button. That’s what Dodd’s used to and what he prefers. Problem is, the players were used to their “usual” casinos, which use a dead button. Players got confused and noted their concerns, so the Isle went to a dead button. Similarly, local players were used to a Mississippi straddle, being able to raise from any position. “It’s not my thing; I think it changes the action somewhat, but that’s what they’re used to and that’s what they want, so we did it,” Dodd said.

CUSTOMER SERVICE: The Isle will spread any game up to $100, which is the maximum bet allowed in Black Hawk casinos — a substantial improvement from the original max bet of $5. (The new law was passed in 2008.) Dodd is willing to spread any game the players ask for, unlike several of the other rooms, he said. The room also charges a $4 max rake, which is a buck cheaper than the going Black Hawk rate, and provides a $2/hour comp rate to all players.

The Isle also wants to make it easier for poker players to stay overnight in its hotel from Sunday through Thursday: After two hours of play, you get a room for $29. After six hours, you stay for free. Given that the drive back down that narrow highway isn’t optimal late at night, much less after an adult beverage or two, the overnight stay isn’t a bad idea at all.

VARIETY: In addition to making itself open to whatever the players want, the Isle hosts several no-limit hold’em and Omaha/8 tournaments during the week, plus “Deep Stack Saturday,” a hold’em tournament Dodd calls an incredible value: Players start with 12,000 chips for a $90 buy-in, or they can add (as presumably everyone does) another 8,000 for an extra $10. Blinds start at 25-50 and increase every 30 minutes, so it’s a good option for players who like to stay selective for a while.

Overall, Dodd thinks it’s a winning combination, but it’s still early going. The Isle has gotten off to a solid start, he said: “We’ve been hearing really good things from the players. Now it’s just a matter of getting them to tell their friends, start bringing some more of the action over here.”

— Rick Gershman is the Ante Up Ambassador for Colorado. You can email him at rickgershman@gmail.com.