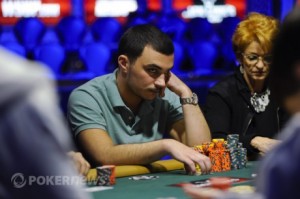 On the third day of the $2,500 No-Limit Hold’em event, 39 players took their seats looking to make the final table and win a gold bracelet. Players battled hard and bust-outs came at a pace slow enough so that it took over half the day to reach the final table, nearly guaranteeing that the event would not complete on Day 3.

Thomas Miller led the field going into the final table, which included Eddy Sabat. This is Sabat’s first WSOP final-table appearance. The pace of slow bust-outs continued, and by the end of 10 levels, five players still remained at the final table. Thomas Middleton worked his way up to take over the chip lead with just over 4 million in chips. Eddy Sabat is still alive with just over 2 million in chips, and Thomas Miller will start the final day as the short stack with 1.88 million.

Who will take the bracelet on Friday. Follow along with ourlive event coverage.

Day 3 of the $10,000 H.O.R.S.E. Championship began with 23 players looking to take down this mixed-game title. By the time the final table was reached, the atmosphere was strangely reminiscent of the Event #11 final table from the 2010 WSOP. Tom Dwan had the high-stakes poker world sweating bullets while he held the chip lead for a good part of that table. Simon Watt became everyone’s best friend after knocking Dwan out in that one.

This final table was not much different. Sure, the game was different, but Dwan still took the chip lead into the final table. Another huge difference was the competition. At this final table, he faced Michael Binger, Shawn Buchanan, and Fabrice Soulier, as well as four other very competent competitors.

Dwan kept things interesting for a while, but then began to slide. Eventually, he was down to 305,000 and decided to put that to risk during stud with ace-high, and Shawn Buchanan made the call with split eights. Dwan picked up a pair of nines on fifth street and his hand was

with one card to come. Buchanan held

for a flush draw. On seventh, Buchanan flipped over the

and his flush left Dwan drawing dead. The high-stakes world can breathe another sigh of relief. Tom Dwan did not win his bracelet bet in this event. He finished in fifth place.

This final table reached heads-up before play was suspended at the conclusion of 10 levels. Buchanan began the match with a 2:1 chip lead, leading 4.8 million to 2.4 million over Fabrice Soulier, who came storming back and took over the chip lead after a massive Omaha hi-lo pot that he scooped with a wheel. That pot gave him 5 million to Buchanan’s 2.2 million.

Soulier extended that lead and had Buchanan down to just 340,000 at one point. Buchanan started a small comeback of his own to finish the day with 910,000 in chips. Soulier will return on Friday with 6.29 million to see if he can close the deal against Buchanan. Action will resume at 15:00 PDT (2200 GMT) on Friday.

For more on all the action at the final table, read our live coverage blog.

The 298 players who began Day 2 of the $1,500 No-Limit Hold’em Event were all looking to cash the event and work their way to the final table. The money was reached relatively quickly, and 216 players will take home a payday from this event. Some of those going home with a little more jingle in their pocket are Shawn Busse, Brandon Wong, Bryan Devonshire, Vincent Luchardie, Justin Smith, La Sengphet, Sam Trickett, and Guillaume Rivet.

Only 23 players remain after Day 2 play, with Perry Lin leading with exactly 1 million in chips. The big story of the day is pro Melanie Weisner. She is sixth in chips with 549,000 and is looking to become the fifth woman this year to make a final table and the first to win an open WSOP bracelet since Vanessa Selbt in 2008. Play will resume at 14:30 PDT (2130 GMT) Friday and continue until a bracelet is awarded.

Find out who cashed in this event by reading our live reporting pages.

Action began in Day 2 of the $2,500 Pot-Limit Hold’em/Omaha event with 131 players looking to cash and make the final table. The money was reached after an extended bubble period that lasted nearly an entire level of play. Greg Lee was all in for just 4,200 preflop with

to keep Lee in the lead and gave Williams a straight draw. The turn brought the

but Lee still needed to fade 16 outs. The

fell on the river to give Williams a better two pair and the remaining players were in the money.

After 10 levels of play, 22 players remain in this event with David Lestock’s 452,000 in the lead. Scott Clements sits fifth in chips, and other players in contention include Carter Gill, David Baker, and Joe Hachem.

Check out all the Day 2 action in our live event blog.

Attendance continue sto rise in the 2011 WSOP. The $5,000 No-Limit Hold’em Six-Handed event easily shattered last year’s attendance. Taking the felt for this one, 732 players, an increase of 164 players over last year’s version of this event. As expected, this field was a "who’s who" of poker. With 15,000 in starting chips, these players were looking forward to playing a little deep-stack poker for a change.

At the end of Day 1 action, 2010 November Niner Matt Jarvis leads the field with 303,800 in chips. Randy Dorfman is right behind him with 280,000. Daniel Negreanu is fifth in chips, and Eugene Todd, and Shaun Deeb are near the top of the leaderboard, as well. Phil Hellmuth finished the day well above average with 89,800.

Who survived Day 1 of this event? To find out, check out our live reporting blog.

Bracelets will be awarded on Friday in both the $1,500 No-Limit Hold’em and the $2,500 Pot-Limit Hold’em/Omaha. The $5,000 No-Limit Hold’em Six Max will burst the bubble, and contenders will be separated from the pretenders. The weekend will be kicked off by two new events. First, the $1,500 Limit Hold’em Shootout at 1200 PDT (1900 GMT) will draw out the limit specialists. Next, the $10,000 Omaha World Championship will draw a world-class field to settle the question of who is the best in the game.

On Thursday, the PokerNews crew discussed Jason Mercier’s second career bracelet-win on Wednesday and just how sick Mercier is in tournaments. Later, the adorable Lauren Kling joins the show to talk about her series, her future, and her entrepreneurial spirit.

Everyone is doing it. Why aren’t you? Click here to listen.

In case you didn’t know, Eli Elezra is currently going around the Rio bald after losing a prop bet to Mike Matusow. Kristy Arnett caught up with both Elezra and Liv Boeree in the latest episode of Versus where she spoke with them about each other’s play and about the prop bet that left Elezra a lot lighter up top.