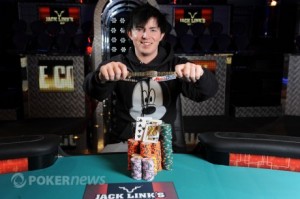 Three players returned on Sunday to play for the bracelet in the $2,500 10-Game Mix event. Chris Lee led with 1.425 million, followed by Brian Haveson with 997,000 and Travis Pearson with 813,000. On the second hand of play, Pearson was all-in during no-limit hold’em with pocket tens and facing the

of Lee. An ace on the flop put Lee in the lead, and those aces held to to kick off heads-up play.

Lee led Haveson 2.28 million to 953,000 to at the start of heads-up action. Haveson quickly slipped to 275,000 before managing a couple of double-ups to stay alive. Those double-up failed to provide any real momentum and during 2-7 lowball, Haveson put the last of his approximately 400,000 stack in after the second draw. He held

and was facing a pat

. Haveson caught a king and Lee took the bracelet.

For more on how Lee took the bracelet, read our live reporting blog.

Once four-handed play was reached in this event, James Hess went on a tear that resulted in him building a huge chip lead. By the time heads-up play was reached between Hess and Richard Harwood, Hess held 8.1 million to Harwood’s 3.1 million. The final hand saw the two take a flop of

and the two started a raising battle that resulted in Harwood being all-in. Harwood showed

for nines-up and Hess showed

for trip sixes. Both the turn

blanked for Harwood, and Hess took the title.

James Hess won the largest Seniors Event in the history of the WSOP. He took home the bracelet and $557,435.

All the action from this final table can be found in our blog.

Only 25 players returned for Day 3 of the $3,000 Pot-Limit Omaha event. It took about three hours to reach the final table of this event and Tex Barch was the final table bubble boy. Barch was all-in preflop holding

. A seven on the flop and eight on the river gave Parker two pair and sent Barch home short of playing for his second bracelet.

Ben Lamb entered the final table as the chip leader with 1.12 million. Chris Harder was second with 880,000 and Adam Junglen followed with 800,000. Brock Parker was looking for his third WSOP bracelet and started seventh in chips. Parker, unable to win his third bracelet in the event, was eliminated in seventh place.

Heads-up for the bracelet was between Sam Stein and Ben Lamb. Stein started fifth in chips at the start of the final table but by heads-up, He was the chip leader and held a 2:1 advantage over Lamb, who never got anything going during the match-up and failed to close the gap.

In the final hand, he was all-in on the turn with the board showing

for Broadway and Lamb showed

for the sucker end of the straight. Lamb needed an ace to survive, but the river brought the

and Stein came out on top.

Find out more about how our champion was crowned by reading our live coverage of the event.

Day 2 of the $1,500 No-Limit Hold’em event kicked off with Adam Lippert leading and 362 players looking to make the money in this event. Stuart Hosen was the bubble boy of the event. He was all-in with

of another player. The flop fell

to pair both player’s kicker. Unfortunately, the turn and river both brought eights and Hosen was hosed.

T.J. Cloutier was among tthose who finished in the money for this event. Others who cashed included Jason DeWitt, Michael Rocco, Svetlana Gromenkova, Matt Affleck, and Layne Flack. At the end of 10 levels, 35 players remained. They will return on Monday and play for the Event #32 bracelet. Dror Michaelo leads the field with 876,000. Day 1 chip leader Adam Lippert is still alive and just below average in chips.

Is your favorite players still alive in this event? Read our live coverage blog and find out.

John Racener led a field of 127 going into Day 2 of the Stud 8 or Better World Championship. Players had a long day on the felt; the field was scheduled to break the money bubble in this event. By the end of the day, there were still 18 players remaining in this event, meaning the players returning on Monday will play to both the money and the bracelet.

Eric Rodawig leads with 695,000, and David Benyamine is in second with 448,000. Phil Hellmuth is in seventh place and looking to make his second final table of the 2011 WSOP. Other notable players that are alive are Joe Tehan, Phil Laak, Erik Seidel, Bill Chen, and Cyndy Violette.

Who else made the final day? Check out our live reporting pages to see.

Another $1,000 No-Limit Hold’em event kicked off on Sunday with 3,144 players taking their seats, hoping to win a bracelet and close to 500 times their buy-in. Because this was the only new event of the day, the notables came out in force. Among those playing on Day 1 were Matt Affleck, Melanie Weisner, Gavin Smith, Jimmy Fricke, Dwyte Pilgrim, Bruce Buffer, Tom Dwan, Matt Graham, Kathy Liebert, JJ Liu, and Jonathan Little.

The pace of bustouts on Day 1 exceeded the pace of any other large field no-limit event this Series. By the end of the day, players actually reached the money of this event, and 323 remain. Christopher McClung leads the field with 114,100 with Amanda Baker, Chad Batista, and Lars Bonding all in top 10 of chips.

To find out more on this massive field, read our live coverage of the event.

Bracelets will be awarded on Monday in the $1,500 No-Limit event and the $10,000 Stud 8 or Better Championship. Because the money bubble was already cracked in the $1,000 No-Limit Hold’em event, the players can now focus on making the final table. The $5,000 Pot-Limit Omaha Six-Handed event will be the only new event to kick off on Monday. Expect strong numbers in this one and a superstar field.

Why should you listen to the PokerNews Podcast? How about great guests like Bertrand Grospellier, Brandon Adams, and Mark Kroon? In addition, you get insight into all the happenings during the prior week at the 2011 WSOP.

To find out what you have been missing, click here.

Kristy Arnett caught up with Andy Frankenberger after the bracelet ceremony on Sunday. Frankenberger won his first bracelet on Saturday after besting a 2,500-player field. He spoke with Kristy about his win and his mindset going into playing a tournament of that size.