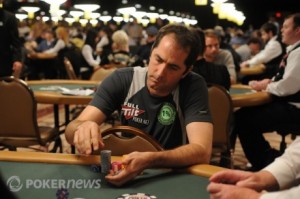 Day 19 of the 2011 World Series of Poker was supposed to see two more bracelets awarded in the $1,500 No-Limit Hold’em and the $2,500 10-Game Mix, but only one reached that goal. The $1,000 Seniors World Championship and the $3,000 Pot-Limit Omaha both made the money and began their final table march. Event #32, another $1,500 No-Limit Hold’em event drew another massive crowd while an elite field took the felt in the $10,000 Stud 8 or Better World Championship.

Day 3 of the $1,500 No-Limit Hold’em event started with 28 players looking to make the final table. Amazingly, the final table was reached after about two hours of play and Steven Merrifield held a 1 million chip lead over the rest of the field. The 2010 World Poker Tour Player of the Year, Andy Frankenberger, was second in chips to start the final table.

Merrifield failed to maintain his chip lead and slid early at this final table. He was knocked out in sixth place when he ran a pair with an open-ended straight draw into Robert Shortway’s nut straight. Heads-up play for the bracelet was between Joshua Evans and Andy Frankenberger. Evans held a 6.5 million to 4.7 million lead to start the match-up. Evans stretched out to a more than 2:1 lead before Frankenberger began his comeback.

Frankenberger doubled up to take the chip lead when his

. He moved up to his own nearly 3:1 lead before the final hand. Both players saw a flop of

and the betting action resulted in Evans shoving for around 2.5 million. Frankenberger made the call and showed

for just top pair. The turn

missed both and Frankenberger took the bracelet.

Andy Frankenberger can now add a WSOP bracelet to his list of accomplishments. In addition to his first bracelet, he took home $599,153.

The $2,500 10-Game Mix started play on Saturday with only 19 players remaining, and most of the poker world watching chip leader Shaun Deeb. Even with only 19 players, it took nearly six levels to reach the final table of six in this event. Shaun Deeb had a swingy day but managed to make the final table as the chip leader with 1.3 million. This was more than double the chips of his nearest competitor Brian Haveson.

John D’Agostino made this final table, as well, but he began with the short stack and was quickly eliminated in sixth place. Deeb’s swingy day continued at the final table, but ended up being a nosedive. Deeb took several big hits in succession to see his stack reduced to just 129,000, which he committed during the no-limit hold’em round by shoving preflop with

left Deeb with just three outs as a seven would give Pearson a better straight. Unfortunately for Deeb, the

came on the turn and only a ten on the river could save him. The river was the

and Shaun Deeb’s swingy day ended in a fourth-place finish.

Deeb’s elimination was the last of the day, because a full ten level had been reach. Three players will return on Sunday to play to the bracelet in this event. Chris Lee leads with 1.425 million, followed by Brian Haveson with 997,000, and Travis Pearson is the short stack with 813,000.

Check out how we reached our final three in our live reporting blog.

Day 2 of the $1,000 Seniors No-Limit Hold’em Championship started with 529 players looking to make the money in the event and work their way through to the final table. The money was reached and 396 players will take home a payday in this event. Some of the notable players taking money home were author Jim McManus, Marsha Waggoner, Shirley Williams, James Mitchell, Susie Isaacs, Mike Sica, and Paul Magriel.

Play ended on Day 2 with 37 players remaining. Craig Koch will take 915,000 and the chip lead into Day 3 play. Jack Ward made the final table of this event last year and is currently seventh in chips.

Only 138 players returned for another long day in the $3,000 Pot-Limit Omaha event. The first order of business was to bust the money bubble, and Tristan Clemencon was the unfortunate bubble boy. Clemencon moved all-in on a flop of

and was called by Jonathan Cuevas. Cuevas held

for a wrap draw and Clemencon held

for aces with an open ended draw. The turn fell the

, missing both, but the river

By the end of 10 levels, 26 players still remain in this event. Sam Stein leads with 843,000, followed by Ben Lamb with 657,000. Brock Parker and Adam Junglen are both in the top 10 in chips while former bracelet winner Tex Barch is still alive and just slightly below average in chips.

We take nothing out of the pot in our live coverage pages.

Another day, another huge Day 1 field for the 2011 WSOP. The first day of the $1,500 No-Limit Hold’em event drew a field of 2,828 players and again forced other events to start late. Of course, that is the type of problem that officials at the WSOP like to have. Many notables took their seats at the felt on Day 1. Among those who were unable to build a stack to survive were Bruce Buffer, Jeff Madsen, Allen Cunningham, Jason Mercier, Jennifer Tilly, Humberto Brenes, Tom "durrrr" Dwan, Phil Hellmuth, Michael Mizrachi, Jeffrey Papola, Kathy Liebert, and Joe Cada.

After ten levels, the field was reduced to 362 players who will return Sunday to play to the money. Adam Lippert is the current chip leader with 139,000. Chino Rheem currently sits in third with 110,000 with Layne Flack, Brett Jungblut, and Eric Cloutier rounding out the top 10.

For more on this massive Day 1 field, read our live blog on the event.

The $10,000 Stud 8 or Better World Championship drew a stellar field of 168 players, just two off of last year’s total. As is customary for these $10k events, the field in this one was another world-class field, represented by those leading at the end of Day 1. John Racener, the 2010 WSOP Main Event runner-up, finished the day with the chip lead with 95,200. Maxwell Troy, David Benyamine, Brandon Cantu, Allen Kessler, Justin Smith, Ted Forrest, and Bernard Lee are all in the top 10.

Just to remind those who may not remember this event last year, Allen Kessler made the final table and ultimately finished runner-up in this event. Can he make the final table for a second straight year? If so, he will have to navigate a field that still has 127 players left after Day 1. Those players will return Sunday to play to at least the money bubble.

To find out how your favorite player fared, read our live coverage of the event.

Bracelets will be awarded on Sunday in the $2,500 10-Game Mix, the $1,000 Seniors Championship and the $3,000 Pot-Limit Omaha event. Players will reach the money in both the $1,500 No-Limit Hold’em and the $10,000 Stud 8 or Better World Championship while just one new event kicks off on Sunday. Another $1,000 No-Limit Hold’em event will kick off on Sunday and is expected to have another massive field.

Miss any of the PokerNews Podcast? We understand. Life sometimes gets in the way. You only missed Bertrand "ElkY" Grospellier, Mark Kroon, Brandon Adams, and Randal Flowers. In addition, you missed out on recaps and analysis of all of this week’s happenings at the WSOP. There is good news. Our archives are available 24-7 for you to catch up on what you missed.

Kristy Arnett caught up with Women’s Poker Hall of Famer Susie Isaacs during Day 2 of the $1,000 Seniors Championship. She talks with Kristy about why she loves playing in the Seniors Event and about her 69 hats.