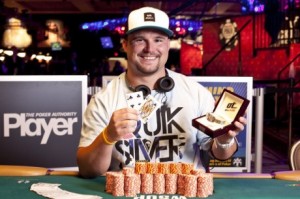 The final table of the Event #24 started with a nine-way tie for the chip lead, which would have been a record had this not been a shootout event. Each player began the final table with 1.5 million in chips. Sean Getzwilller, Tom Marchese, and Adam Junglen were the headliners at the final table, but no one was able to put up a solid challenge for the bracelet.

Mark Radoja took a more than 2:1 chip lead into heads-up play against Jeffrey Gross. Gross stayed competitive during the match, but the large chip lead and Radoja’s rail serenading of "My Sharona" proved to be too much for Gross to overcome. The final hand of the match saw Radoja shove preflop with

and receive an insta-call from Gross with

, and Radoja was in the lead with tens. Gross picked up a straight draw with his over cards. However, all those outs went away when the

Find out how the champion was crowned in our blog.

Day 3 of the $1,500 Stud 8 or Better event started with 23 players looking to make the final table, but the big story was the run of ESPN’s Norman Chad. He was fourth in chips to start the day and many wondered if he could pull off a storybook run to a bracelet. Chad played well, but ultimately fell in 12th place.

The two battled back and forth and Viox finally started to pull away. Sexton was actually down to 175,000 at one point, but managed to pull back close to 1 million close to the end of day’s play. Eventually, a full 10 levels were reached before the bracelet was awarded. As such, the two will return on Friday and finish their heads-up match. Viox leads with just over 2 million to Sexton’s 640,000.

Read about all of the action at this final table in our live reporting blog.

Day 2 of the $2,500 No-Limit Hold’em Six-Handed event started with 189 players looking to bust the money bubble and earn their spots at the final table. Paul Dewald, who finished as the bubble boy, was first crippled when he ran

into pocket queens and then decided to gamble with

. Weisner spiked a ten on the

flop, and Dewald was drawing dead when the

Jake Cody, Ayaz Mahmood, Jean-Robert Bellande, Alex Bolotin, Sorel Mizzi, Ted Lawson, and Nenad Medic were among the players who finished in the money in this event. By the end of the day, 22 players remained. They will return on Friday to play for the bracelet. Anthony Ruberto and Chris Moorman are the only two players over 1 million in chips, so far. Ruberto has 1.55 million and Moorman 1.2 million.

To find out more on all the action from Day 2, read our live coverage.

The $10,000 Limit Hold’em Championship started Day 2 play on Thursday with 106 players and Daniel Negreanu leading the field. Only 18 players reached the money in this event, and Shunjiro Uchida that finished the day as the bubble boy. He was all-in with

against Richard Brodie, who held

. A nine on the flop gave Brodie the lead, and those nines held to send everyone into the money.

Who made the final table of this event? Read our live coverage blog to see.

A massive field of 2,500 turned out for Day 1 of the $1,500 No-Limit Hold’em event on Thursday. This was a jump of 159 players from the second $1,500 No-Limit event in 2010. As players ground through the opening day, big names were dropping like the price of a bad stock. Liv Boeree, Michael Mizrachi, Jonathan Duhamel, Faraz Jaka, Jeff Papola, Josh Brikis, Phil Laak, Jennifer Tilly, and JP Kelly all fell during Day 1 action.

Rick Romine leads the field going into the second day of play with 176,100. Two-time bracelet winner Matt Graham is seventh in chips. Allie Prescott, Brandon Leeds, and Gualter Salles are all still alive in the event and above average in chips.

Find out how this mammoth field was shrunk to size in our live reporting pages.

The $2,500 10-Game Mix Event kicked off on Thursday and was one of the more anticipated events on the WSOP schedule. For the first time in history, badugi was dealt in a WSOP event. In short, badugi is a triple-draw lowball variant whose goal is to create a four-card hand with one card of each suit.

By the end of registration 431 players turned out to try their hands at this new event and by the end of day’s play, several big names were at the top of the leaderboard. John Cernuto leads with 52,700 and David Benefield trails by just 1,000. Rob Hollink, Dan Heimiller, Shaun Deeb, Sam Grizzle, Greg Raymer, and Freddy Deeb are all inthe top 20 in chips. On Friday, 162 players will return and play to the money in this event and begin their march to the final table.

How did players fare playing Badugi at the WSOP? Read our blog on the event to find out.

If you missed any of this week’s podcasts, we forgive you — this time. Our guests this week were Mark "P0ker h0" Kroon, Bertrand "ElkY" Grospellier, Brandon Adams, and Randall Flowers. To hear what you’ve been missing, check out our archives.

The PokerNews Podcast won’t save you 15 percent on car insurance, but it will entertain you. Listen to it here.

Lynn Gilmartin caught up with Melanie Weisner during the $2,500 No-Limit Hold’em Six-Handed event to ask her "six questions max."