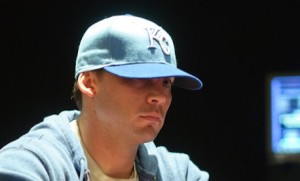 The final day of the $1,500 H.O.R.S.E. Event began with 17 players looking to win the first mixed-game title of the 2011 WSOP. Victor Ramdin was the final table bubble boy, finishing in ninth place. He moved in with two pair and a weak low draw in Omaha Hi-Lo, and Jonathan Tamayo called with trip sevens and the nut low draw. The river failed to help Ramdin, thereby setting the final table.

Adam Friedman led a solid field going into this final table. Michael Chow was right behind him in chips, and David Baker and Jonathan Tamayo also made this final. Friedman failed to play for the bracelet, falling in third place. He put the last of his chips in during hold’em with

Steury had built a monster stack during the final table and led 3.5 million to 835,000 when heads-up play was reached. With betting limits of 60,000/120,000, Chow needed to chip up fast. After a few hands, Chow decided to put the last of his chips in during Stud 8 with

and made the easy call. Neither player improved through sixth street. At the river, Steury flipped his hole card first, revealing the

. This left him with his original pair of aces. Chow just needed to pair anything on his board. He flipped over the

, a card not on his board, and the match was over.

For more Day 3 and final table action, read our live coverage of the event.

Sunday saw 469 players return for the restart of the $1,500 No-Limit Hold’em event. Players wasted no time in getting to the money bubble in this event as 145 players were eliminated in the first level. Among the players cashing in this event were Humberto Brenes, Matt Stout, Allie Prescott, Erick Lindgren, Dwyte Pilgrim, David Daneshgar, Erica Schoenberg, Dan Kelly, Pascal LeFrancois, and Jeffrey Papola.

Play was halted in this event 1t 36 players who 36 will return on Monday to play for the bracelet. Foster Hays leads with 1.25 million and Jordan Young is the only other player over the 1 million mark in chips.

Day 2 was a long one. Find out more in our live reporting blog.

Day 2 of the $2,500 Limit Hold’em Six Max Event started with 130 players looking to make the money and work their way toward the final table. A large part of the day was spent getting to the money bubble. Robert Thompson was the unfortunate bubble boy of the event. He was all-in preflop with

and behind Rep Porter’s

. Thompson flopped a straight draw, but no help came and the remaining 36 players were in the money.

Ten levels were played before the final table was reached in this event, leaving 12 players to return Monday to play for the bracelet. Alexander Kuzmin leads the remaining field with 412,500. Limit specialist and bracelet winner Matt Matros is still alive but is the short stack. Play resumes at 1500 PDT (2200 GMT) on Monday.

Feel this recap is a bit limited? Check out our live coverage blog for more.

The $1,000 No-Limit Hold’em Event kicked off on Sunday with a massive field of 3,175 players. Among those taking a shot at what is referred to as the "$1k lotto" were Matt Jarvis, Galen Hall, Faraz Jaka, Marco Traniello, Liv Boeree, David Sklansky, John Phan, JJ Liu, Shaun Deeb, and Scott Montgomery. Douglas Lang will be the chip leader heading into Day 2 play. Chad Batista, Sirous Jamshidi, and Amnon Filippi are all still in the field and above average in chips.

To find out more about this mammoth field, read our live reporting pages.

Only 35 players were knocked out on Day 1, leaving 91 players to return on Monday. Sebastien Sabic leads those players with 129,900. Joe Cassidy, Mike Sexton, Jennifer Harman, and Steve Zolotow are among the top 10 in chips.

Did your favorite stud advance to Day 2? Read our blog and find out.

If you missed the PokerNews Podcast this week, we’ll assume you didn’t have Internet. Why else would you miss interviews with Allen Bari, Maria Ho, Matt Savage, and even Marco Valerio from Quadjacks.

Since you clearly have Internet now, check out this week’s podcasts here.

Rumors of Sam Grizzle’s passing have been greatly exaggerated. Sarah Grant caught up with him during the $2,500 Limit Hold’em Six Max to discuss why he is playing the event and why he thinks Shannon Shorr looks like a nerd.