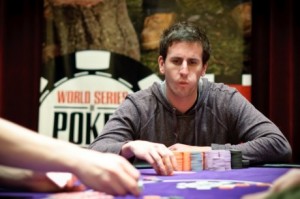 Day 2 play in the $1,000 No-Limit Hold’em event saw the weekend fields combine, bringing together 623 players for the march to the final table. First, the money bubble had to be burst, and Nick Gibson was the unfortunate bubble boy for the event. He was all-in with pocket nines and David Rood made the call with

. Gibson faded the flop, but a

on the turn put Rood in the lead. Another king on the river sealed the deal and the remaining 423 players were in the money. Among the notables cashing in the event were Valdemar Kwaysser, Dan Heimiller, 2011 WSOP Circuit National Champion Sam Barnhart, Vitaly Lunkin, and Kathy Liebert.

Jon Turner will take a massive chip lead into Day 3 play. He currently holds 749,000 in chips and the next closest player, Kyle Speake, has 573,000. Sixty players remain and a bracelet is scheduled to be awarded in this event on Tuesday.

Find out how your favorite player fared in our live reporting pages.

The final table of the $1,500 No-Limit 2-7 Lowball event began with Matt Perrins holding the chip lead. Not far behind was Bernard Lee with 265,000 and chips. Chris Bjorin and Jason Mercier also made this final table and both were looking to add to their career bracelet totals. Bernard Lee fell in fourth place to Matt Perrins. He was all-in pre-draw and held

and Perrins made the call and held

for a eighty-seven but Lee caught a

Heads-up play for this event was between Chris Bjorin and Matt Perrins who held a 950,000 to 270,000 chip lead. That’s as close as the match got as Perrins ground Bjorin down to just 95,000 before finishing him off. The last hand between the two saw Perrins move all-in pre-draw and hold

. Bjorin made the call and held

. Bjorin asked Perrins to draw first so he would know if he hand a chance. Perrins obliged and proceeded to draw a

We won’t leave you drawing dead on coverage. Check out our live reporting blogs for more.

Anthony Spinella will start Day 2 with the chip lead with 223,000. His closest competitor is Ryan Welch with 156,300. Play stopped with 188 remaining, just eight shy of the bubble. Players will return Tuesday to play to the money, and then the final table.

Action resumes at 1430 PDT (2130 GMT) and you can follow all of the action with the live updates from the PokerNews Team.

Only 24 players were knocked out on Day 1, leaving 178 to come back for long Day 2. Twenty-seven players will be paid in this event with play scheduled to play past the money and to the final table on Tuesday.

This report was like a chopped pot, only half full. Find out what else happened in our live reporting blog.

A bracelet is scheduled to be awarded on Tuesday in the $1,000 No-Limit Hold’em event. Players will return for Day 2 action in the $1,500 NL Six-Max and $10k Omaha Hi-Lo Championship where they are scheduled to play to the money and the final table. Only one new event will kick off on Tuesday: the $1,500 Triple Chance No-Limit Hold’em event should draw a massive field and provide tons of simulated rebuy action.

The PokerNews Podcast crew returned on Monday to talk the prior weekend’s action at the 2011 WSOP. They were then joined by $1,500 Seven Card Stud bracelet winner Eugene Katchalov who discusses his comeback win on Saturday and his year so far.

You won’t know what was said unless you listen, so listen to the podcast.

Kristy Arnett pulls aside "former" actor Brad Garrett during the $1,500 No-Limit Six-Max for another edition of Calling the Clock. She asks him about his day and even scores some tickets to Brad’s show.