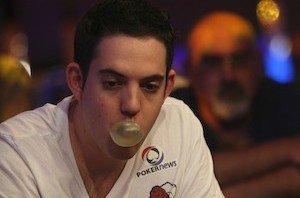 This year, Bad Beat on Cancer has joined the ranks as an officially sponsored World Series of Poker charity. As such, the company, which helps raise money for the Prevent Cancer Foundation and Nevada Cancer Institute, will have a greater presence at the Rio throughout the summer encouraging players to donate 1 percent of their winnings to the charity. As a little incentive, founder Phil Gordon, who PokerNews recently had a chance to interview, and the WSOP, have joined forces to offer visitors a series of free seminars, aptly called the “First Annual Bad Beat Seminar Series,” which will feature 11 of the world’s top poker players.

The seminars, which will be held at 10:30 a.m. on various weekends throughout the summer in the Brasilia Ballroom, will be hour-long sessions focusing on poker instructions, personal insights, and stories. Forty-five minutes will be devoted to a lecture; a 15-minute Q & A session will follow. In exchange, organizers hope attendees will consider a $20 donation to Bad Beat on Cancer or will agree to pledge 1 percent of their WSOP tournament winnings to benefit Bad Beat on Cancer, with 100 percent of their donations being tax-deductible.

Here is a look at the scheduled seminars.

As we mentioned, PokerNews had the chance to sit down with Gordon to talk about Bad Beat on Cancer and its expanded role at the WSOP.

Can you give our readers a little history about Bad Beat on Cancer and how it came to be?

In 2003 at the World Series of Poker, my friend Rafe Furst and I were trying to figure out a way to get people involved with cancer prevention, both from an educational perspective and from a fundraising perspective. We were at the WSOP and the idea hit us that, hey, we could just ask for 1 percent of whatever people cash for. People are used to swapping out small little pieces here and there, and people are used to piecing themselves out, so why not piece yourself out for charity? That was the idea.

We thought, you know, that 1 percent is nothing, everyone will donate 1 percent, and it was an idea that really had some legs. We had great participation that first year in 2003. Chris Moneymaker pledged and then won $2.5 million. Right away he handed over $25,000, and that kind of got us off to the races. Every year we’ve grown and increased our visibility at the WSOP, and people started to recognize the green patch that they would see on TV. Over the course of many years we’ve had continued support and participation from the WSOP, but this year I sat down with Ty Stewart and said, “Look, we’ve been operating in this cooperative fashion for a long time, but we’ve never really formalized our relationship. It’s time to take this to the next level.” They agreed and we were named an official charity partner for the WSOP for the first time.

Is that partnership how the Bad Beat Seminars came to be?

Yes. We’ve always had great success at the Main Event. One year we had over a third of the people that cashed in the Main Event as pledgers. We’ve always had at least two people at the final table, and we’ve had no problem with the Main Event, but the preliminary events we’ve had trouble getting acceptance. One of the ways that I thought we could encourage people to embrace the initiative in the early days of the WSOP is by giving them something for free, and that’s how I came up with the idea for these seminars.

I talked to friends in the poker community, got them signed up, and we think it’s going to be a sold-out house. The room that these speeches will happen in will seat 1,000 people. It’s 100 percent free, anyone can come, and they’ll be almost WSOP Academy-type seminars, but completely free. We’re hoping to get a lot of people to show up so that we have a chance to talk to them a little bit about the Prevent Cancer Foundation and our mission, as well as Bad Beat on Cancer.

As far as the players go, you have got quite the eclectic mix including both young and old, veterans and online stars, etc. Was that intentional? Did they all volunteer their time?

Absolutely. In fact, not a single person that I asked turned us down. I had a hit list of guys and ladies that I believe are truly at the top of the game and are good speakers and teachers, which was extremely important. I think you can tell from the list that we really have the cream of the crop. I think it’s a great mix. This is an unbelievable value and a great chance to learn from some of the best in the game.

You’ll be teaching one of the seminars titled “Inquisitive Poker.” Can you give us a little preview on what people can expect?

Yeah, inquisitive poker is all about asking yourself the right questions. My theory is that it doesn’t really matter what answers you come up with, but it’s all about the questions you ask yourself in certain situations. For instance, if a guy raises preflop and I’m trying to figure out what to do — whether to fold, reraise, or call — a lot of people take a standardized approach to that. I like to think about stuff like how many hands has this guy played recently? How many hands have I played recently? What range of hands do I expect this player to have? Do I need to win this pot? The types of questions you ask yourself in each situation is actually more important than the answers to those questions.

I’m trying to get people to think more along the lines of a scientific way of approaching the games instead of a methodical or prescriptive way.

Last year you had the gimmick of coming to the Rio in track suits. Can we expect a similar gimmick this year?

No [laughs], those are done, that was a very poor idea. I’m gonna give full credit for the track suits to Rafe. This year we’re going suits and ties. This is a professional effort now that we’re an official charity partner of the WSOP, and we will be represented as such.

My personal goal for Prevent Cancer is to educate as many people as possible that cancer is largely preventable. Fundraising aside, I think it’s really important for people to understand that 75 percent of all cases of cancer are easily preventable or curable with some preventive measures they can take in early detection screenings.

I don’t care how much money we raise, I don’t care how many people are involved, all I want to do is educate as many people as possible that they have a choice to make. That choice is to take some preventive steps right away and to make some lifestyles changes that will really improve their quality of life long term.