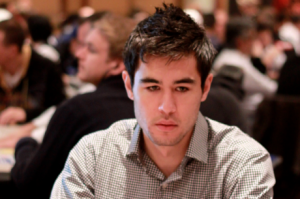 Day 3 of the 2011 World Series of Poker saw Sean Drake win the first bracelet of the Series. The $1,500 Omaha Hi-Lo reached the money and the $25,000 Heads-Up Championship reached the final four. Two new bracelet events kicked off as well as the highly anticipated WSOP Grudge Matches.

Four players returned on Thursday to complete the final table of this event. When play began, Sean Drake was the chip leader and had Jason Baker nipping at his heels. When heads-up play was reached, it was Drake facing Baker, but Baker had taken a nearly 2:1 chip lead. Drake battled back, and after a pair of double-ups, Drake sat with a better than 6.5:1 lead. In the final hand, Drake shoved on the button with

and Baker called with

. The board blanked both players and Sean Drake won the first bracelet of the 2011 World Series of Poker and $82,292.

Want to see how it all went down? Check out our live reporting blog.

The final four of the $25,000 Heads-Up Championship was determined after a short day of play. Gus Hansen had his hands full with Matt Marafioti but managed to battle back to advance. Eric Froehlich had no easy time in advancing to the final four. Nikolay Evdakov had a 5:1 advantage at one point, but Froehlich doubled up multiple times to stage a comeback of his own. On a board of

for two pair against the

on the river signaled the final hand of this match and punched E-Fro’s ticket to the final four.

Also advancing to the semi-final round were Jake Cody and Yevgeniy Timoshenko. Cody will face Hansen in the semis while Froehlich will take on Timoshenko. The winners will then later square off in a best-of-three match-up, with the winner taking the bracelet.

Day 2 of the $1,500 Omaha Hi-Lo Event began with 201 players looking to make their way to the final table. The bubble burst right at dinner and the final 90 players finished in the money. Several big names received their first cash of the WSOP, including Erik Seidel who finished in 32nd, Men "The Master" Nugyen in 27th, and Allen Cunningham in 26th. The day completed with 25 players remaining. Francesco Barbaro leads with 459,000, but Matt Waxman trails by just 1,000. Vladimir Shchemelev and Jimmy Fricke also finished the day at the top of the leaderboard.

Day 3 of this event is scheduled to play to the bracelet. Follow all of the action here at PokerNews.

Attendance for events this year continues to be strong as the $5,000 No-Limit Hold’em event drew a field of 865 players, a jump of 73 players year-over-year. As expected, most of the big names turned out for this one, including Phil Laak, Dan Harrington, Vanessa Selbst, Liv Boeree, Tom "durrrr" Dwan, Bertrand "ElkY" Grospellier, Kathy Liebert, Maria Ho, David Williams, Brandon Cantu, and 2010 WSOP Main Event Champ Jonathan Duhamel.

Gavin Cochrane finished the day as chip leader holding 175,500 in chips. Victor Ramdin finished up right behind with 174,700. Dave "Doc" Sands, Jordan Morgan, Jamie Rosen, and Joe Tehan all round out the top ten in chips. Play will resume on Friday with 243 players looking to make the money in this event and begin their march to the final table.

Want to know how your favorite player fared? Check out our live blog of the event.

Find out how your favorite "stud" did in this event by checking out our live coverage of the event.

The much-anticipated WSOP Grudge Match series began on Thursday afternoon. The first match was a rematch from the 1989 WSOP Main Event as Johnny Chan faced Phil Hellmuth. After a see-saw match between the two, Chan was able to avenge his 1989 loss to Hellmuth. Hellmuth had been ground down to just 125,000 in chips and moved in with

preflop. Chan held pocket eights. The board missed Hellmuth, and the rematch belonged to Chan.

The second match of the day was supposed to be Erik Seidel and Johnny Chan squaring off in a 1988 Main Event rematch. There was just one problem. Seidel was still in the $1,500 Omaha Hi-Lo. Since rematches don’t award bracelet, and Seidel chose to stay to chase down bracelet No. 9.

The marquee match of the rematch series pitted 2003 WSOP Main Event Champion Chris Moneymaker against Sam Farha in a best-of-three match-up. In the last hand of the first match Moneymaker’s

was able to outrun the

of Farha. Match two was a bit of a different story. Farha dominated the match from the opening bell. In the last hand, Moneymaker shoved on a flop of

and made the call. Farha needed some help to win the hand and got that help when he spiked the

on the river. The deciding match ended up going to the 2003 Champ. Farha’s final hand saw him all-in preflop and dominated with

. The board missed both players, and history repeated itself.

Want more on the rematches? We suggest you check out the live reporting pages.

On Thursday, the PokerNews Podcast crew was joined by WSOP rookie Zach Gruneberg to talk about his first run at a bracelet. The crew also discussed the ongoing Phil Ivey vs. Full Tilt Saga, as well as the events under way at the Rio.

Listen in to the latest PokerNews Podcast here.

The PokerNews crew works hard but plays hard, too. In this video, the PokerNews hostesses introduce you to some of the live reporting staff and get their predictions for this years WSOP.