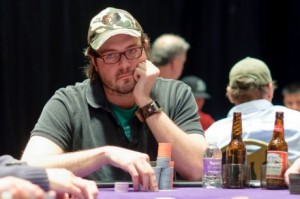 During Day 2 of the 2011 World Series of Poker, the final table was reached in the $500 Casino Employees Event. The field in the $25,000 Heads-Up Championship reached the Elite 8 and the $1,500 Omaha Hi-Lo Event set an all-time WSOP attendance record.

Day 2 of the this event saw 77 players return to play their way to the first bracelet of the 2011 World Series of Poker. Jason Baker went into the final table as the chip leader with 700,000, more than double his nearest opponent, Daniel Quach. The final table was not kind to Quach; he ultimately ended up finishing in fifth place. He shoved with his last 82,000 holding

and Sean Drake made the call with

flop missed both players, but a

on the turn put Drake in the lead. The river

was a blank for Quach, and he collected $17,835 for his strong finish.

This event was originally scheduled to award a bracelet on Day 2, but a full 10 levels were played and a champion had not been reached. As such, play will resume on Thursday with four players remaining. Sean Drake takes the chip lead into the final day of play with 1.058 Million. Jason Baker is his closest opponent with 727,000.

The final 32 players in this event returned on Wednesday to play their way into the Elite 8. The top 16 players of this event made the money. John Duthie was the first to advance to the Sweet 16 when his pocket queens held up against the pocket deuces of Carlos Mortensen. David Benyamine called an all-in bet from Anthony Guetti preflop and found himself flipping for his tournament life with pocket eights against Guetti’s

. An ace on the flop put Guetti in the lead and his aces held to propel him to the money. Other players to make the round of 16 were Nikolay Evdakov, Yevgeniy Timoshenko, Jake Cody, Tom "durrrr" Dwan, and Gus Hansen.

Eric Froehlich continues his march to his third career bracelet after eliminating John Duthie, who moved all-in preflop with pocket fours only to see Froehlich call with sevens. The board missed both players and Froehlich advanced to the Elite 8.

Early on, it appeared that Tom Dwan was going to coast into the quarterfinals against Gus Hansen, but a pair of double-ups put Hansen back into the match. In the final hand, Dwan three-bet all-in for 320,000 and Hansen made the call. It was

for Dwan. A nine on the flop gave the lead to Hansen, who faded the turn and river to advance.

Play is scheduled to resume tomorrow at 1500 PDT (2200 GMT) when the final four will be determined. You can follow all the action on our live reporting pages.

The first Omaha event of the 2011 WSOP set an all-time attendance record for an Omaha event. For this event, 925 players turned out, eclipsing the record of 918 set in 2009. This field was stacked with pros and Omaha specialists, all looking build a stack early. Among those in the field included Jeff Lisandro, Barry Greenstein, "Minneapolis" Jim Meehan, Sorel Mizzi, Jimmy Fricke, Humberto Brenes, Allen Cunningham, Ted Lawson, and Men "The Master" Nguyen.

By the end of Day 1, Guillaume Rivet emerged as the chip leader with 71,200. Other players in the top 10 after the first day included Barry Greenstein, Jimmy Fricke, and Michael Jensen. Jean-Robert Bellande, T.J. Cloutier and Scott Clements are well above average in chips heading into Day 2.

For all the split-pot action you can handle and more, check out our live coverage of this event.

Wondering what are some of the best things to do in Las Vegas? Sarah Grant checks in with several players to find out.