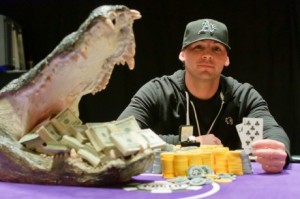 The 2011 World Series of Poker kicked off on Tuesday from the Rio All-Suite Hotel and Casino in Las Vegas. Anticipation was high as Event #1, the $500 Employees Event, kicked off at noon. As the day wore on, the money bubble burst and Jordan Dhooghe emerged as the chip leader going into Day 2. Poker’s elite turned out in the evening for Event #2, the $25,000 Heads-Up No-Limit Hold’em World Championship. After two rounds of play, 32 players advanced to take their shots at the first open bracelet of 2011.

Heading into Event #1, many people worried about the turnout at this year’s WSOP. If this event is any indication of things to come, though, then the WSOP is in for a stellar year. The event attracted 850 players, up 129 players from last year’s total. Among the players in the field were defending champion Hoai Pham, WSOP vice president Ty Stewart, and legendary tournament directors Jack McClelland and Matt Savage. Jean-Robert Bellande was a surprise entrant. His position as ambassador at the Aria casino made him eligible for this event. Unfortunately, these players were unable to survive to Day 2.

As action continued into the night, Jordan Dhooghe and Thanh Ngo emerged as chip leaders. Ngo finished the day with 101,400 chips off the strength of a sizable pot against two players. The small blind moved all-in for 3,450 after the button raised. Ngo three-bet to 8,125 and was called by the button. Ngo held

against pocket kings for the small blind and pocket tens for the button. An ace on the flop gave Ngo the lead, and she was able to fade the remaining kings and tens in the deck to knock out two players.

Dhooghe began his march to the chip lead after catching a six-outer to drag a huge 35,000 chip pot. He was all-in on a flop of

for an open-ended straight draw. His opponent was in great shape holding pocket eights. The turn

missed both players, but the river

gave Dhooghe the straight, and he never looked back. He will start Day 2 with 129,800 in chips.

Action resumes Wednesday at 1430 PDT (2100 GMT), and you can follow all the action here at PokerNews.

The field was cut from 128 to 32 over two rounds. Round 1 presented some interesting match-ups, including Peter Jetten versus Tom Dwan, Daniel Negreanu versus Alex Kostritsyn, Isaac Haxton against Robert Mizrachi and Jason Mercier versus Gus Hansen. King of the high-roller tournaments, Erik Seidel, failed to make it out of Round 1 against Dani Stern. Seidel got it in with

flop missed both players, but the turn

gave Seidel a sweat. That sweat turned into an early exit when the

Round-2 matches included Daniel Alaei against Justin Bonomo, Yevgeniy Timonshenko versus Dan "Jungleman12" Cates, Kenny Tran against John Juanda, and John Duthie versus Jonathan Duhamel. Tom "durrrr" Dwan was among those advancing to Round 3, and the final hand of his match with Bryn Kenney saw him flat-call the turn with the board showing

. When the river brought the

Find out who will advance to the Sweet 16 and beyond on our live-reporting pages.

In addition to the first two event restarts, the first non-hold’em event of the 2011 WSOP kicks off. Event #3 is the $1,500 Omaha Hi-Low Split event. This event has set records the last two years for number of participants, and you can be sure that the best and brightest in this game will be on hand.

Of course, our tournament coverage would not be complete without videos from around the Rio. Expect plenty of interviews, recaps, and zaniness from the gorgeous ladies of PokerNews all summer long. In this VOD, we are given the VIP treatment as Kristy Arnett, Sarah Grant, and Lynn Gilmartin give us the grand tour of the WSOP.