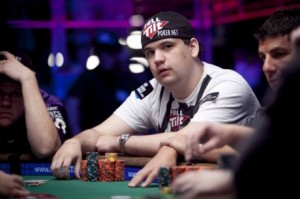 The 2010-2011 World Series of Poker Circuit season is finally in the books. On Sunday night, the National Championship $1 Million Freeroll concluded with Sam Barnhart taking home the lion’s share worth $300,000. Not only that, Barnhart earned himself a WSOP gold bracelet for his victory, the first of the 2011 WSOP.

When the final table began, only nine players remained from the starting field of 100. Coming into the day, Jonathan Poche was the chip leader with La Sengphet sitting in second place. Neither of them were involved in the first elimination of the day.

Matthew Lawrence moved all in from the small blind for about 70,000 after James Anderson had raised to 11,500 from the button with the blinds at 2,500/5,000 with a 500 ante. Action got back to Anderson and he quickly called with the

. Lawrence was at risk holding the

fell and that was the end of the line for Lawrence. He went home in ninth place for a payday of $30,000.

About 15 short minutes later, Adam Hui hit the rail in eighth place. He got all of the money in on the

, but was far behind the

that Poche held. The turn and river both blanked off and Hui walked away with a $35,000 finish.

Falling in seventh place was Drazen Ilich. Action folded to Charles “Woody” Moore in the small blind and he raised to 32,500. Ilich stuck his entire stack in the middle for just over 90,000 from the big blind and Moore called with the

to be racing for his tournament life.

Charles "Woody" Moore raised to 32,500 from the small blind after action folded around to him. Drazen Ilich was in the big blind and reraised all in for a little over 90,000 — it looked to be 91,500 from our vantage point. Moore quickly called and revealed the

to be racing for his tournament life.

and gave Moore the lead with a pair of kings. The turn produced the

, but that wasn’t the three Ilich was looking for. The river completed the board with the

and finished the tournament for Ilich. He was eliminated in seventh place for $42,500, earning his second-largest live cash ever.

Moore wouldn’t go any further than the final six though, as he hit the rail next. He was all in preflop with the

for Anderson. This time, Moore couldn’t win the race and he found himself exiting with $55,000 in his pocket as his consolation prize.

After losing a few players early, Sengphet started to control the table and work the big stack. She seemed to be in cruise control, but all of a sudden Barnhart put a stop to that.

From under the gun, Barnhart raised to 40,000 with the blinds at 5,000/10,000 with a 1,000 ante. Sengphet reraised from the big blind and then Barnhart moved all in. Sengphet quickly called. The reraise amount was unknown as it wasn’t announced with the action progressing so quickly. Barnhart tabled the

. The flop, turn and river were run out

and Barnhart doubled up. He was all in for 314,000 and moved 638,000 in chips at the time. That was good enough to give him the chip lead as he basically swapped stacks with Sengphet.

Barnhart then used his chip-leading stack to send Poche out the door in fifth place. After the two saw a flop of

, all of the money went in the middle. Barnhart had Poche dominated with the

. The turn was the

, which couldn’t give Poche the help he needed and he was eliminated, earning $75,000 in prize money.

Sengphet found herself down to the final four. The player that took the last of her chips was WSOP Circuit Midwest Regional champion Anderson. Sengphet check-raised all in on a flop of

holding middle pair with the

. Anderson called her with the

and had her on the ropes. The

completed things on the river. Sengphet finished off a great 2010-2011 WSOP Circuit with a fourth-place finish for $100,000. This was her first six-figure score after having won two rings earlier this season.

After Josh Evans bowed out in third place for $135,000 thanks to his

failing to improve against Anderson’s pocket queens, the stage was set for a heads-up battle between Anderson and Barnhart. When heads-up play began, the chips were nearly even with Anderson holding 1.021 million to Barnhart’s 977,000.

Barnhart pulled in front of Anderson and increased his lead before the final hand came up. With the action on Barnhart on the button, he looked up and eyed Anderson’s chip stack before announcing he was all in. Anderson peeled back his hand before nodding in accordance and making the call to be at risk. Barnhart tabled the

to give Barnhart the lead, but Anderson wasn’t completely dead. He held a straight draw and could still hit an ace as well. The turn brought the

to leave him with nothing but ace high and the second best hand. Barhart’s pair of kings would win the hand and the tournament, notching him $300,000 and a WSOP gold bracelet for his victory. Anderson claimed $200,000 for his second-place finish.

The completion of the 2010-2011 WSOP Circuit marks the end of a great season that was really brought back to life with all the positive changes made. It’s safe to say that the WSOP Circuit is back on the map as one of the premier poker tours in the world. The completion also marks the beginning of the greatest tournament series the world has to offer and that is the World Series of Poker. The first gold bracelet was awarded here at this WSOP Circuit National Championship, but the official slate of events for the 2011 WSOP begins on Tuesday with the $500 Employees Event and the $25,000 Heads-Up World Championship.

PokerNews will be live from the Rio for all the coverage you can handle as the Official Live Reporting Team for the WSOP and we’re excited to say the least. It’s going to be another amazing summer with millions of dollars won, dreams made true and lives changed. We hope you can join us for as much of it as possible and if you happen to be roaming around the Rio, stop by and say hello!